Helen Tonus, 89, has profiled about 120 team members at Villa Da Vinci Retirement Residence in Vaughan, ON, where she lives. Helen has lived at Villa for 21 years, and began profiling team members about 10 years ago.

Helen’s profiles are published monthly in Villa Da Vinci’s newsletter, which is distributed to team members, residents, and residents’ families. Helen said she’s had several people let her know that they look forward to her profiles. 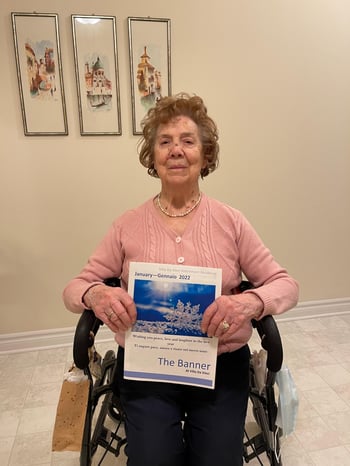 Shortly after Helen moved into Villa Da Vinci, she began proofreading the monthly newsletter. She had never had a passion for writing before. Her first profile featured three servers in the dining room that went above and beyond to make residents feel at home.

“They were really nice and helped residents. One would even speak a specific Italian dialect, because one resident didn’t know correct Italian,” Helen said. “I am quite proud of that [profile].”

The story was a hit, and soon Helen had other team members asking if she would consider profiling them. Helen said that while she does accept requests, many of her profiles are accidentally recommended by other residents who mention the team member’s good deeds in passing. Currently, she has three profiles she’s working on.

“I always was a talker,” Helen said. She has many friends at Villa Da Vinci. She enjoys a good joke, and can often be found on the main level playing cards with anyone interested in joining. She loves Villa’s music nights and spontaneity.

During the interview, Helen received a surprise package of popcorn, which was being handed to all residents in celebration of National Popcorn Day. “When they have extra snacks like this, it’s nice,” Helen said with a laugh.

Helen grew up in the Italian community, which made being at a retirement residence that celebrates and embodies her heritage important. Her parents were originally from Italy, just south of Rome. In a time before commercial vehicles and public transportation, they would walk for half a day to reach the city.

They immigrated to Canada in 1929, three years before Helen was born. In 1954, Helen married Larry Tonus, who had emigrated from Italy. They had four children together and settled their family in Woodbridge, ON. The highly Italian area felt like home. However, many of the neighbours did not speak or read English, and on occasion, they could not read Italian either.

Helen would often help them by reading any documents to them or driving them to appointments and acting as an interpreter. Eventually, Helen, Larry, and Helen’s brother opened a pizza shop in Toronto, ON. During that time, they sponsored multiple local children’s sports teams. Including girl’s teams, at Helen’s request. She said that her husband, Larry, “never said no” when it came to something she wanted. They owned and operated the pizza store for 25 years before retiring.

Throughout her life, Helen always loved to draw. Now, she continues to enjoy that passion at the many art classes held at Villa Da Vinci. Between that and her new love of writing and interviewing, she has a rather busy schedule.

Sneih Charan has led anything but an ordinary life. She’s travelled the globe, found love at first sight, and paved her own way through the world.
END_OF_DOCUMENT_TOKEN_TO_BE_REPLACED
Quinte Gardens Retirement Residence

Sneih Charan has led anything but an ordinary life. She’s travelled the globe, found love at first sight, and paved her own way through the world.
END_OF_DOCUMENT_TOKEN_TO_BE_REPLACED