On February 18, Dorothy Forester celebrated her 100th birthday at Royale Place Retirement Residence in Kingston, where she lives. 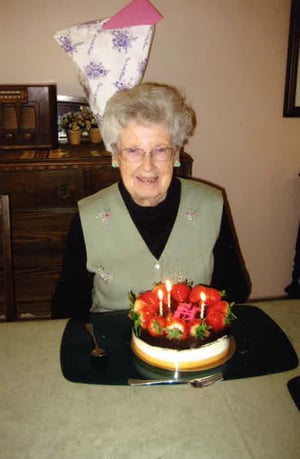 “I just feel ordinary. I’ve had a few days more than most people, and I am happy about that,” Dorothy said about her birthday. “[Turning 100] just happened, I have no secret whatsoever.”

Dorothy has been at Royale Place for six years, and she enjoys the comradery of the residence. She’s also involved in the fitness programs, like seated yoga, and enjoys reading and theatre.

“Everybody’s my friend here, it’s just that kind of place.”

Dorothy grew up on a 400-acre farm in Godfrey, ON, in a house built by her father. She attended a one-room schoolhouse that was 2 miles away — it’s burned down since then.

“The world certainly has changed. I grew up in the depression, when people were lucky to eat… Things picked up after the war, and we lived in the best of times, and now we have an excess.” 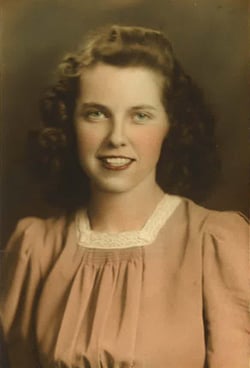 After elementary school, Dorothy attended Sydenham High School. When WWII hit in 1939, Dorothy joined the civil service. She worked by Lakeside in Kingston and managed the accounts for overseas soldiers. She would often go to the base as they left, ensuring their accounts were in order before their departure.

She also attended dances at the base. It was at one of these dances that she met her husband, Alexander Raymond, whom everyone called Ray. She and Ray were married in 1944 and had three daughters. After the war, Ray stayed in the military. Because of this, the family travelled a lot, even living in Germany for several years.

Once their children were older, Dorothy worked at Sears in their accounting department. She also volunteered with the Red Cross. Ray stayed in the military for 25 years before retiring and going on to work in the penitentiary service.

Andrew Mathuik, 90, has enjoyed his four years at Aspira, he holds the staff in very high regard, is an active member of the Residents Council and...
END_OF_DOCUMENT_TOKEN_TO_BE_REPLACED
Quinte Gardens Retirement Residence

An avid reader, Joanne Perschick has a passion for books so it’s no surprise that her favourite thing about Aspira Quinte Gardens is the library. She...
END_OF_DOCUMENT_TOKEN_TO_BE_REPLACED