Sneih Charan has led anything but an ordinary life. She’s travelled the globe, found love at first sight, and paved her own way through the world.
Inspirational Life, Retirement, Looking for myself, Looking for a loved one, Independant Living, Retirement Living, Aspira Yorkton Crossing

When you see them spending time together it’s obvious that Jim and Evelyn Andreas love to laugh. The Saskatchewan couple have been married for 72 years and their light-hearted glow is a testament to their solid union. One of the many things that keeps them smiling is their new life in Independent Living at Aspira Yorkton Crossing.

Evelyn's relaxing recovery
“We were happy we made the move,” said Jim about their arrival six years ago. Evelyn needed both hips replaced at the time and after the surgeries Jim was only too happy to move somewhere his wife would have no chores or responsibilities while she recovered. Likewise Evelyn relished being able to relax and just switch off from her regular everyday duties. “It was such a relief for me being here,” she said. “I didn’t have to do anything. The cooking and cleaning was all done and I didn’t have to worry about my crippled hips.”

Growing up and meeting up
Both Jim, aged 91, and Evelyn, 93, grew up in the south-west corner of Saskatchewan. In his youth Jim delivered milk around the town of Lancer, near Swift Current, from the age of six all the way up to 14. “I knew every person in town and they all treated me real good,” said Jim. Evelyn, meanwhile, grew up north of Lancer but would be schooled in Lancer just like Jim. “She (Evelyn) became a teacher and she was making more money than I was so I asked her to marry me,” joked Jim before proudly, adding that he “picked the right woman.” Jim, the comedic character that he is, went on to say that he “married out of love and she married out of pity.”

Raising their huge family
Jim’s father was a farmer and he worked the land with his dad all the way through high school. After Evelyn and Jim married they themselves became grain farmers and started a family. “We had children left and right, they called it continuous cropping, we’d have a harvest each year,” said Jim, which resulted in a chuckle from Evelyn. And he wasn’t kidding, the couple are the proud parents of 11 children, all of whom still live in Saskatchewan. In 1962 the Andreas family made the switch to Canora, a town just north of Yorkton, and that’s where they stayed.

How they spend their days
Jim - who is a published author - spends a lot of time writing during an average day at Aspira Yorkton Crossing. “As soon as I moved in here I was writing continually,” he said. When Jim isn’t writing he has other ways to pass the time. “I read a lot and check out TV for a good movie. Since all of our children live in the province, quite often we have visitors. I also have a record player with about a thousand records and 300 tapes,” added Jim before Evelyn, with a big smile on her face said: “But we just can’t dance like we used to.”

Moving to Aspira has given Evelyn the chance to do things she never had time for. “Everything was so handy for me. It was just such a nice change to be able to sit down and do something else. I went through my family history, I wrote my own family history and go through old pictures, we’re busy, we’re doing something all the time,” she said.  “I have a sleep and I go down to eat. I like all the exercise programs. We didn’t get into the card playing thing, but it’s all there if we want. We had all these things we never had time for and now we’re getting to do them. Evelyn also mentioned the importance and joy of relaxing and doing nothing for an afternoon. “You can sit and watch TV and you don’t have to feel bad because you’re not doing something.”

Good friends and good food
Both Evelyn and Jim say they’ve made plenty of friends since moving to Yorkton Crossing. “We’ve made lots of friends here,” said Evelyn. “But the only thing is you have them for a while and they either move on or pass on and then you start with another bunch. Our friends have been so good,” she added. The couple also spoke very highly of the staff at Yorkton Crossing. “The young workers here have been great with us,” said Jim.

When it comes to the dining experience at Yorkton Crossing the couple heaped praise on the choice and quality of the food. “Everything is fine, very good,” Jim and Evelyn said almost in unison. “And if you want more there is more. There’s every kind of choice there and if you want something different they’ll give it to you, no problem,” Jim added.

An instinctive switch with no regrets
The switch from home to retirement residence was almost immediate. With Evelyn laid up with her bad hips the couple saw an ad for Aspira in the paper and moved in days later. “I just saw an ad in the paper and we moved straight in,” said Jim. He always had a preference for larger buildings with better airflow so he made sure to check out the Yorkton Crossing. “The first thing I noticed when I came here was the wide hallways, so many places are narrow,” he added. So with the architecture and atmosphere to his liking they proceeded with the move. 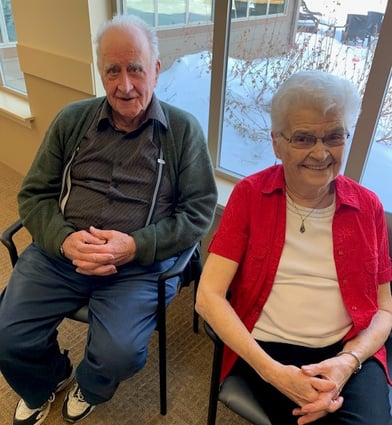 “Don’t be afraid of growing old”
Before the end of the interview Jim and Evelyn offered up advice to those on the fence about retirement living. “Don’t be afraid to get old,” said Evelyn, which brought a laugh from Jim straight away. “It’s different, naturally it’s different, but give it a try,” she added. “Any people that we have talked to we always promoted it and said it’s good.”  Jim had his own take on it: “It’s tough for some of those who are always in command at home but I personally think you should give it a chance and check it out straight away.”

Sneih Charan has led anything but an ordinary life. She’s travelled the globe, found love at first sight, and paved her own way through the world.
END_OF_DOCUMENT_TOKEN_TO_BE_REPLACED
Island Park Retirement Residence

A story from Island Park resident Bob BennettOn a Sunday afternoon late last June I decided to go for a walk in Ferris Park by the way of the...
END_OF_DOCUMENT_TOKEN_TO_BE_REPLACED