Willi Stork’s German accent appears to be as strong as ever. It’s hard to believe he’s spent the vast majority of his life living in Canada. Born in Germany in 1934, Stork grew up during WW2. After surviving the war he moved overseas aged 26. He and his wife Amalie were looking for a new beginning after Willi was promised a job in Canada, however not everything went to plan. “I came with a little child and my wife but I when I arrived the job was gone,” Willi said. “We couldn’t speak a word of English when we came to Canada. But I soon got a job with General Motors in Toronto.”

Making the move to Canada
Willi and Amalie raised five children in Ontario. He took a few upskilling courses with General Motors and ending up staying with the company for over 30 years before retiring at the early age of 59. Following his retirement Willi and his wife - both travel enthusiasts - embarked on several trips. “We started enjoying our lives. We went all around the Caribbean, Germany, France, Austria and we stayed in Florida for three winters. We had a very good life then. But when my wife turned 80 she passed away.”

Just an average day: Playing tunes with his friend
During an average day at Aspira Lynde Creek Gardens Retirement Living Willi – a resident of three years –  enjoys indulging in his passion, music. “I love to play music. I only play the harmonica (see image below) but I love music, any music. I found a man here, a friend, who plays the piano so he and I get together and we play for the residents.”

Willi is very grateful he met his friend and music partner. “Meeting my friend with the piano was a great surprise when I moved in here. We practice and play music together quite often and sometimes we play to an audience.” Willi believes they get an audience because of the songs that they play. “We play the old ones like You Are My Sunshine, and Christmas songs too like Silent Night. It’s my favourite Christmas song. We used to sing it sitting under the tree when I was young in Germany.”

Meeting a lady friend
Willi, 87, says he also met a lady friend by the name of Julia at the senior living home. According to Willi, Julia is a very important part of his new life at Aspira. “She is very quiet, unlike me,” he said before laughing. “She is disabled so I help her with that and she helps me emotionally. It makes a big difference emotionally to know someone that you trust. I don’t like Bingo but I go to it because she likes it; there has to be give and take.”

“I signed the same day”
There was no real pressure on Willi to come to a nursing home. His daughter suggested it, he came and saw the building and signed to move in that day. “My daughter brought me brochures for a home in Port Hope but it was too close to the highway. Then my other daughter took me here (Lynde Creek Gardens). As soon as I came in here it looked very inviting. I signed the same day. I didn’t even look at any other homes in the area.”

“My children at the time gave me the choice, they said ‘Dad you don’t have to go’ and my son even wanted to take me in but I know that young and old don’t fit well together so I went into the retirement home. I figured out that I had enough money, my daughter takes care of my finances and I find Aspira very affordable.”

Activities, food and the “great” staff
When it comes to group activities Willi is fairly standoffish, he prefers to play music with his piano-playing friend instead of participating in the optional programs. “I’m not group participator, I play music with my friend and go to Bingo with my lady friend or very occasionally I’ll have a beer here at the bar with some people.” 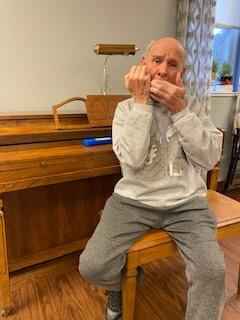 As far as the team members go at Lynde Creek, Willi is full of praise. “They really are great here, I have to say that. They are really good.” Stork said he took a while to adjust to the food at Aspira when he first moved in because he was “so used to cooking the German way”. However, he does enjoy and appreciate the variety and choice available. “If I don’t like the courses for dinner they will make me something I do, like a smoked salmon sandwich, I like that.”

“I eat a big breakfast every morning, porridge, peanut butter on toast and eggs too, scrambled eggs. The breakfast is the best meal for me. I don’t have a big lunch because I’m usually full from my breakfast.”

“I’m very satisfied being here”
Willi wasn’t hesitant to recommend retirement living with Aspira. His brother-in-law’s parents, he said, have plenty of money but “they would never go into a home”. Willi added that this makes it difficult for his brother-in-law who is regularly going back and forth to the hospital with his parents. “I would recommend it for someone who is lonely, if you are in an apartment on your own. Another thing I really appreciate is all the virus stuff is taken care of like the needles. I like that. I’m very satisfied being here,” he concluded with a smile.

Sneih Charan has led anything but an ordinary life. She’s travelled the globe, found love at first sight, and paved her own way through the world.
END_OF_DOCUMENT_TOKEN_TO_BE_REPLACED
Inspirational Life

Sneih Charan has led anything but an ordinary life. She’s travelled the globe, found love at first sight, and paved her own way through the world.
END_OF_DOCUMENT_TOKEN_TO_BE_REPLACED
Island Park Retirement Residence

A story from Island Park resident Bob BennettOn a Sunday afternoon late last June I decided to go for a walk in Ferris Park by the way of the...
END_OF_DOCUMENT_TOKEN_TO_BE_REPLACED