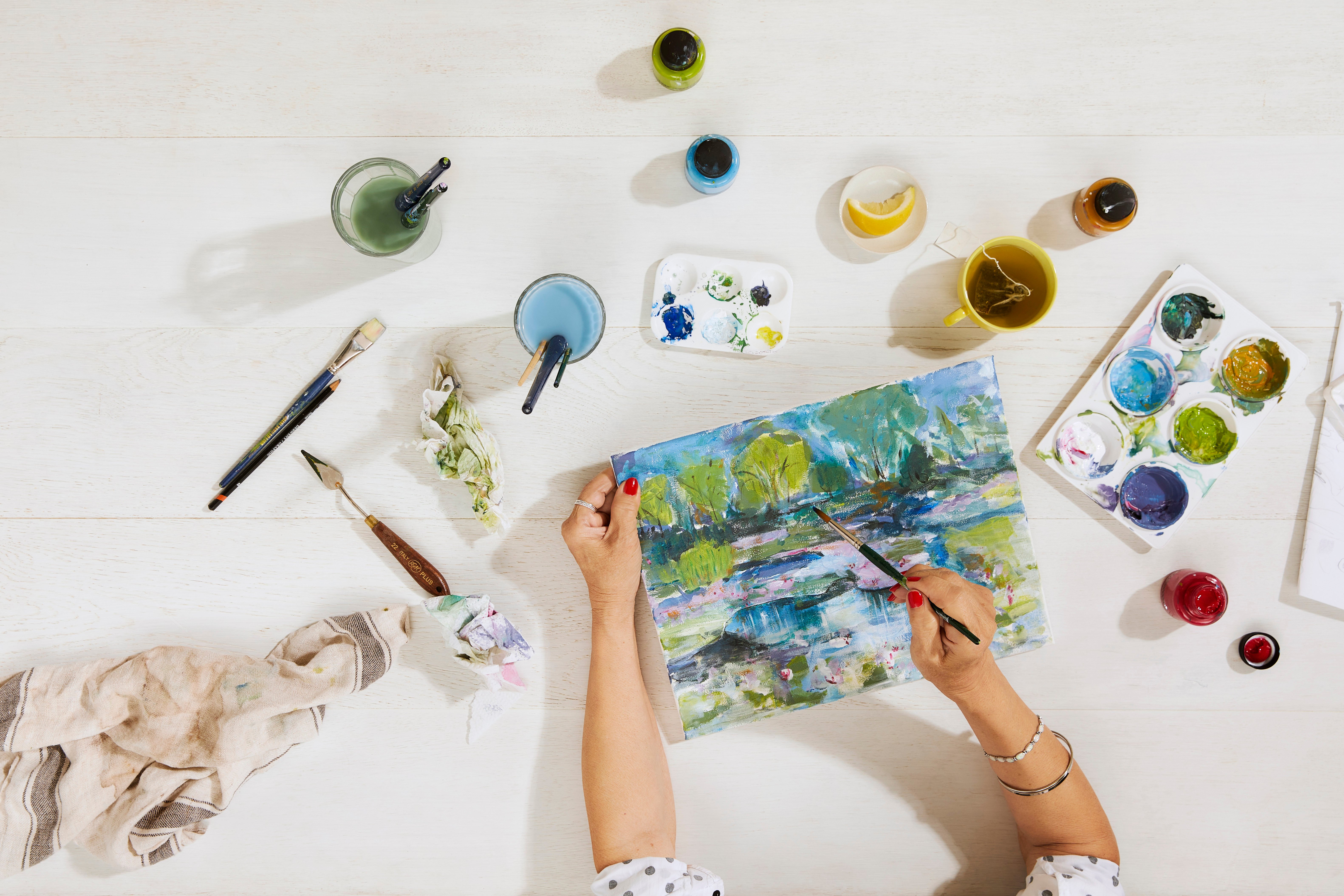 Sneih Charan has led anything but an ordinary life. She’s travelled the globe, found love at first sight, and paved her own way through the world.
Inspirational Life, Ontario, Retirement, Looking for myself, Looking for a loved one, Artists and Art Programs, Retirement Living, Aspira Yorkton Crossing 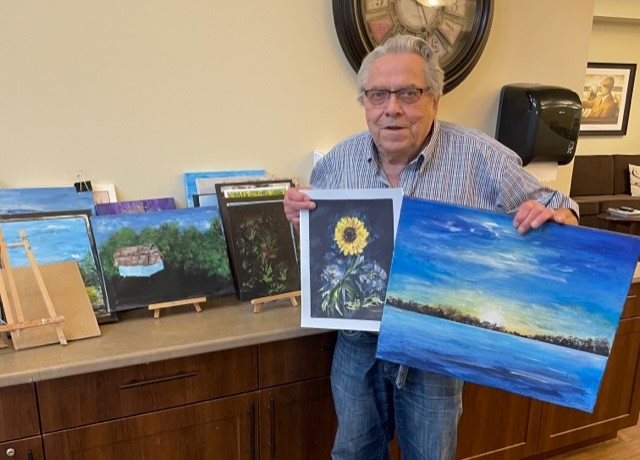 Andrew Mathuik, 90, has enjoyed his four years at Aspira, he holds the staff in very high regard, is an active member of the Residents Council and has reignited his love of art. A highly intelligent and inspirational character, Andrew grew up in Yorkton and jumped into farm work initially in his early teens before deciding he’d much prefer to work with his mind "instead of slinging horse and cattle dung", as he said.

So, off to high school he went in 1949 and never looked back. After six years of university Mathuik armed himself with the educational tools required to be a teacher. Once he became an educator he dedicated himself to his profession like very few others. “I would say I was an elementary school teacher for 20 years and 15 years as a high school teacher. Thereafter I was a substitute teacher for about 30 years. I just couldn’t leave it,” he said with justified pride.

Although teaching was Mathuik’s vocation he is also very passionate about geology, climate studies and the study of precious metals. One day early in his teaching career he reached a fork in the road and had a big decision to make. “I got married and our little boy came along and my wife said: ‘Are you going to hunt rocks in Venezuela or are you going to settle down with your son?’ So I settled down with my son.”

Making the right choice for his wife

Sadly - after Andrew’s astonishing 65-year career in teaching - his beloved wife of 63 years became very ill in 2018 and it was then that their children began to have concerns about the safety and well being of both parents. “My wife wasn’t feeling the best for the six months prior to me coming here,” said Andrew. “I became the cook and the cleaner of the house, this went on and on and I asked myself ‘Am I being fair to her or am I being negligent?’ I could cook and clean well but then she lost her mobility so I knew additional care was needed and I couldn’t give it. That’s when I made the decision to move.”

Andrew and his wife discussed a move to retirement living with their children and soon enough the wheels were in motion. “I talked to my son and asked him ‘where do you think I should go?’, so my son and his wife went around and looked at different places. They checked four or five different homes and after their search my son said ‘I think this (Aspira) is the place for you’.”

“This is the place for me”
All it took was one tour of Aspira Yorkton Crossing and Mathuik knew it was the right fit. “I went for a tour, and as soon as I walked into the building I said ‘this is the place for me’. We moved to Aspira two days later. My wife was here with me for about a month a half before she passed away. Moving from your own home into retirement living is a total transition. Many people don’t realize it but it’s a total change of lifestyle.”

For Mathuik it was a lifestyle change that he loved and it was one he believed has been beneficial for him and his family. “It gave me contentment in many ways, I’m satisfied,” he said. “The routine of the place makes me mobile. They’ll bring in a guitarist to play for us and I’ll go because I feel like I’m going to a mini concert. It’s good for my wellbeing. Bonnie, the co-ordinator here, is very knowledgeable and does the planning so well. She does a lot of good for us, so that it feels like home for us here.”

An average day at Aspira Yorkton Crossing for Andrew is usually busy because he likes to stay active and involved in what’s going on at the residence and with the residents themselves. “I get up and do my exercises to limber up and I find that my whole anatomy totally changes within five or six minutes from a dormant thing into a positive thing,” he said with a smile. “Then I’ll do activities here or an exercise class there. Maybe talk to people a bit, watch television or if I’m up to it I’ll do some painting or drawing. I try to be involved as much as possible.” 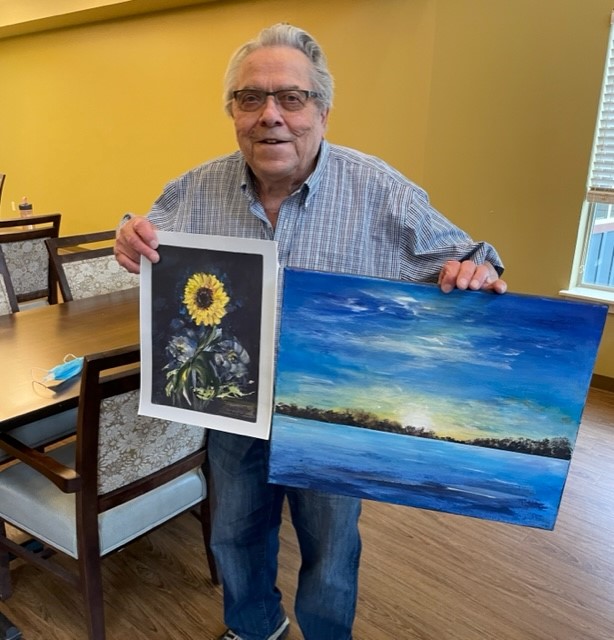 Once at Yorkton Crossing Andrew really began to explore art as a hobby. Drawing was always something he’d been good at but it was only after he arrived at Aspira that he chose to invest real time in it. “Before I came here I could draw fairly well but I never took it seriously until I came here (Aspira). I just started painting, doodling around and I discovered that I could do things in a wonderful way.”

At night Andrew likes unwinding and relaxing with friends. “At nights we’ll do card games sometimes, twice a week so that’s helpful. We’ll sit down and play cards for an hour or an hour and a half. It’s good, we sit around and chat afterwards.”

Mathuik has a great respect and love for the staff. “The staff here is always conscious of their good will to us and that is good. That’s a good sign of good living and that’s what I appreciate about living here.” When it comes to food Mathuik is happy with the selection laid on by – and the healthy intentions of - Aspira’s executive chefs. “Most of the time it’s favourable. I understand that the cooks intend to prepare food meant for healthy living. It’s tasty, nourishing and healthy.”

Positive experiences of retirement living newcomers
When asked to give advice to those on the fence about joining a retirement community, Mathuik’s response reflected not only his own positive experience with Aspira but also the positive experiences of his fellow residents. “Give it a shot for a month or two and see how you feel. You yourself must make the decision to stay or go back to the living arrangement you had prior to retirement living. I notice that some newcomers arrive here and they are unhappy. But I notice after a month or two there’s some brightness about them and they are smiling. There’s real company here, we’re a family you know.”

A story from Island Park resident Bob BennettOn a Sunday afternoon late last June I decided to go for a walk in Ferris Park by the way of the...
END_OF_DOCUMENT_TOKEN_TO_BE_REPLACED
Quinte Gardens Retirement Residence

Sneih Charan has led anything but an ordinary life. She’s travelled the globe, found love at first sight, and paved her own way through the world.
END_OF_DOCUMENT_TOKEN_TO_BE_REPLACED