By 1944 World War II was more than half over, Bernice was only 18 when she signed up for the army.
Veteran Stories, Inspirational Life, Royale Place Retirement Residence, Ontario, Retirement, Kingston, ON

This side of the ocean

The map on the wall was updated daily. Markers showed enemy lines, stolen territory and surrendered land. Bernice Anderson looked at that map almost every day.

Born in Glace Bay, Nova Scotia in September 1926, Bernice’s parents both died before her first birthday, leaving her and her elder brother to be raised by her paternal grandmother, Ellen McPhee, whom Bernice describes as “a wonderful woman.” 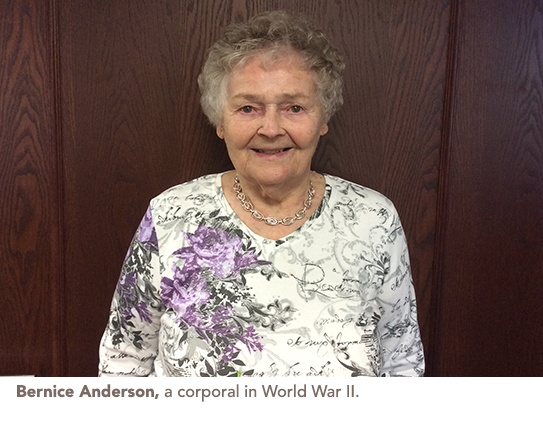 By 1944 World War II was more than half over. Bernice was only 18, and fresh out of high school. She signed up for the army with one of her oldest friends, whom everyone called ‘Lee’.

Both girls were called by the army and started basic training in Kitchener, ON. Afterwards, Bernice was sent to the No. 1 Canadian Woman’s Army Corps Advanced Training Centre in St. Annes, Quebec, where she trained to drive army vehicles. Lee was sent elsewhere, eventually making her way overseas. The two girls had grown up a stone’s throw away from each other, but they would rarely see one another after that.

Bernice had already been driving for a year, but at the camp she learned to drive jeeps, large trucks and double-clutch. At only 18, she wasn’t yet old enough to go overseas. She was sent to Halifax, NS, where she drove officers, a job she became tired of quite quickly.

“One day I was sitting in my car, and I wasn’t feeling too happy about my job and a captain came along and asked me what was wrong,” Bernice said. She told the captain that she was unhappy driving. “The captain said, ‘well I’ll get you another job,’ and he did.”

Bernice was moved to a personnel office in Halifax, where she worked for a short time before being stationed in Kingston. At the office, Bernice kept track of soldiers’ schedules, making notes about who had leave coming up, who was in the hospital, and who had been discharged from service.

“We watched the war,” Bernice said. “We had a big map on the wall, and we would get reports every day about what was happening overseas, and we kept track of what was going on.”

During her time in the office, she was raised to the rank of Corporal.

After World War II ended, Bernice went back to Glace Bay to live with her grandmother. Shortly after that she married Stewart Hillgrove, who she had known since before the war. Stewart worked as a telephone linesman in the military, and was posted in Kingston, ON, where he and Bernice had two children.

“That’s 70 years ago now,” Bernice, who is now 90, said from her suite at Royale Place Retirement Residence in Kingston. She lives close to her daughter now, and enjoys going down to the legion in the evenings. She enjoys the musical entertainment at Royale Place, especially fiddle music, and goes on almost all the outings. She is described as “a lovely lady,” by those who work there.

Sneih Charan has led anything but an ordinary life. She’s travelled the globe, found love at first sight, and paved her own way through the world.
END_OF_DOCUMENT_TOKEN_TO_BE_REPLACED
Inspirational Life

Sneih Charan has led anything but an ordinary life. She’s travelled the globe, found love at first sight, and paved her own way through the world.
END_OF_DOCUMENT_TOKEN_TO_BE_REPLACED
Inspirational Life

Andrew Mathuik, 90, has enjoyed his four years at Aspira, he holds the staff in very high regard, is an active member of the Residents Council and...
END_OF_DOCUMENT_TOKEN_TO_BE_REPLACED