35 years on the ground 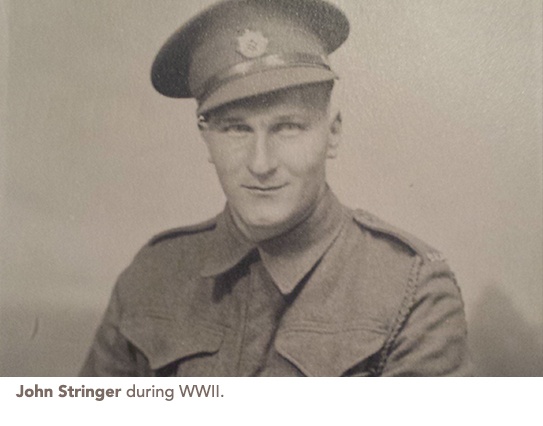 Quartermaster Sergeant John Stringer assembled with the rest of the crew. One of the ships in their convoy had been hit with a German torpedo, and there was no telling how many U-boats were below them.

“We mustered and were told that the Saint Alina had been hit, and to look for survivors,” John said. “All the rest of the convoy dispersed, they just steamed into whatever ports they could get into, because nobody knew how many submarines there were.”

The convoy of between five and 10 ships had been sailing in the Mediterranean. They were headed to Italy, where Canadian troops were already fighting against the Germans. It was 1943. The Saint Alina had been carrying a mostly American crew.

“The ship didn’t sink though, what was left of it sailed into Bizerte Harbour in Africa and sank in the harbour,” he said. “There were no casualties, which is a miracle.”

The convoy would spend a month in Africa waiting for a ship to take them to Italy.

Born in Egham, England, in August 1920, John immigrated to Canada before he was a year old, and he says that Canada is the only home he’s ever known.

After finishing high school, John worked for a lumber company for three years. He had just started studying in Toronto to become a stationary engineer when the war broke out. In July 1940, at the age of 19, John joined the Canadian army.

“The war was on and it was not good for us in 1940,” John said. “I guess at that stage all young men thought it was their duty. We never dreamt the war was going to last six years. I never dreamt it! I thought if I get to England that’s as far as I will get.”

In 1941 John was sent to Aldershot, England, where he served as a training instructor. As new recruits came in he put them through the paces required of general military training. After that, he voluntarily reverted one rank, becoming a quartermaster sergeant, and was sent to Algiers, Algeria, eventually making his way up to Naples, Italy.

“The worst part of the war I spent in Italy,” John said. “The war in Italy was a vicious war, and our people were ― well, I won’t say starved, but half starved. You were always short of everything.” 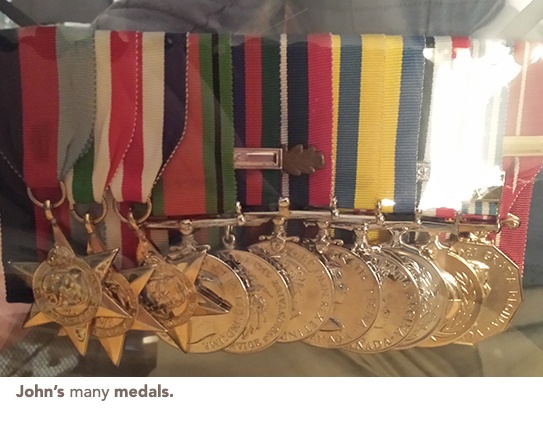 As a quartermaster sergeant, John was responsible for ordering all of the supplies needed by those under his command, a job he took quite seriously.

“I would have to say… I made decisions, it was applicable to a group of men,” he said, when asked what everyday life during the war was like. “When you’re making decisions concerning a group, it has to be the right one.”

After the war, he was posted in Germany for a year, where he was raised back to the rank of Master Warrant Officer. After that he left the army, content to spend some time in civilian life.

He came back to Canada, finished school and wrote his stationary engineer exams, which he passed. He then took a job at Carling Breweries in Kitchener, Ontario. It was sometime after that that he met Regina Alischer. John was 27 at the time, and Regina was 19.

The two were married in 1948, only a few months later, a captain came from London and made John an offer he couldn’t refuse. He’d go back into the army as a sergeant, and could stay in Kitchener.

“It looked pretty good to me at the time so I accepted. I went home to my wife and I said, ‘I think I’m going to join the army.’ She said, ‘Are you crazy?’” John said with a laugh.

“I didn’t know what that would mean,” Regina said. “I didn’t have a clue.” 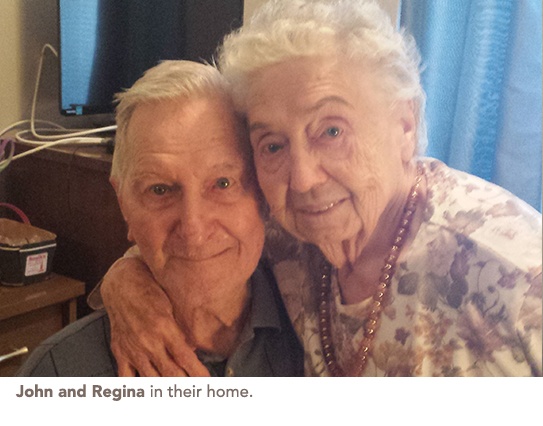 John and Regina had three children: Stuart, Bruce and Karen. Because of John’s career, the family moved more than most, including a 2-year-stint in Germany. However, both he and Regina agree that they were lucky, as John’s postings were usually at least three years, and some were much longer.

But John also had missions and postings where he had to leave the family behind. Prior to his 2-year posting in Germany, John was posted to a Field Company and sent to Korea for a year. He was there for the peace signing.

“Oh, it was always hard,” John said about being away from his family. “I have a hell of a fine woman. Normally, when you have problems at home they phone, they phone, they phone… and you’ve got this group to look after and then you’ve got your own family, and they don’t always agree. But my wife has never done anything but support me.”

In August 1974, Corporal Bruce Stringer, John and Regina’s son, was on a UN Peace Keeping mission with the Canadian Air Force. His plane was shot down over Syria, killing him and eight other Canadians.

“He was 23-years-old and just married a year,” Regina said. “He’d just bought his first house.”

“His life was just starting to break for him,” John said.

In 2014, at a special ceremony held for National Peacekeepers’ Day, Regina was interviewed by CTV and is quoted saying: “It's a day of great honour… When our son went into the military I tried to tell him, ‘You're giving your life’ and he said, ‘This is my country and what I live for.’”

Today, he and Regina live at Woods Park Care Centre in Barrie. Their two surviving children, Stuart and Karen, both live in Ontario. When asked what they enjoy doing now, whether it’s volunteering or just enjoying spending time together, John was quick to answer.

“That’s the correct answer,” John said with a smile.

Sneih Charan has led anything but an ordinary life. She’s travelled the globe, found love at first sight, and paved her own way through the world.
END_OF_DOCUMENT_TOKEN_TO_BE_REPLACED
Awards & Achievements

Sneih Charan has led anything but an ordinary life. She’s travelled the globe, found love at first sight, and paved her own way through the world.
END_OF_DOCUMENT_TOKEN_TO_BE_REPLACED
Villa Da Vinci Retirement Residence

Helen Tonus, 89, has profiled about 120 team members at Villa Da Vinci Retirement Residence in Vaughan, ON, where she lives. Helen has lived at Villa...
END_OF_DOCUMENT_TOKEN_TO_BE_REPLACED