Daisy may be 90 years old, but that hasn’t stopped her from crocheting 500 toques and donating them to the Salvation Army.
Giving Back, Orchard Valley Retirement Residence, British Columbia, Retirement, Vernon, BC

One woman & 500 Toques for the Homeless 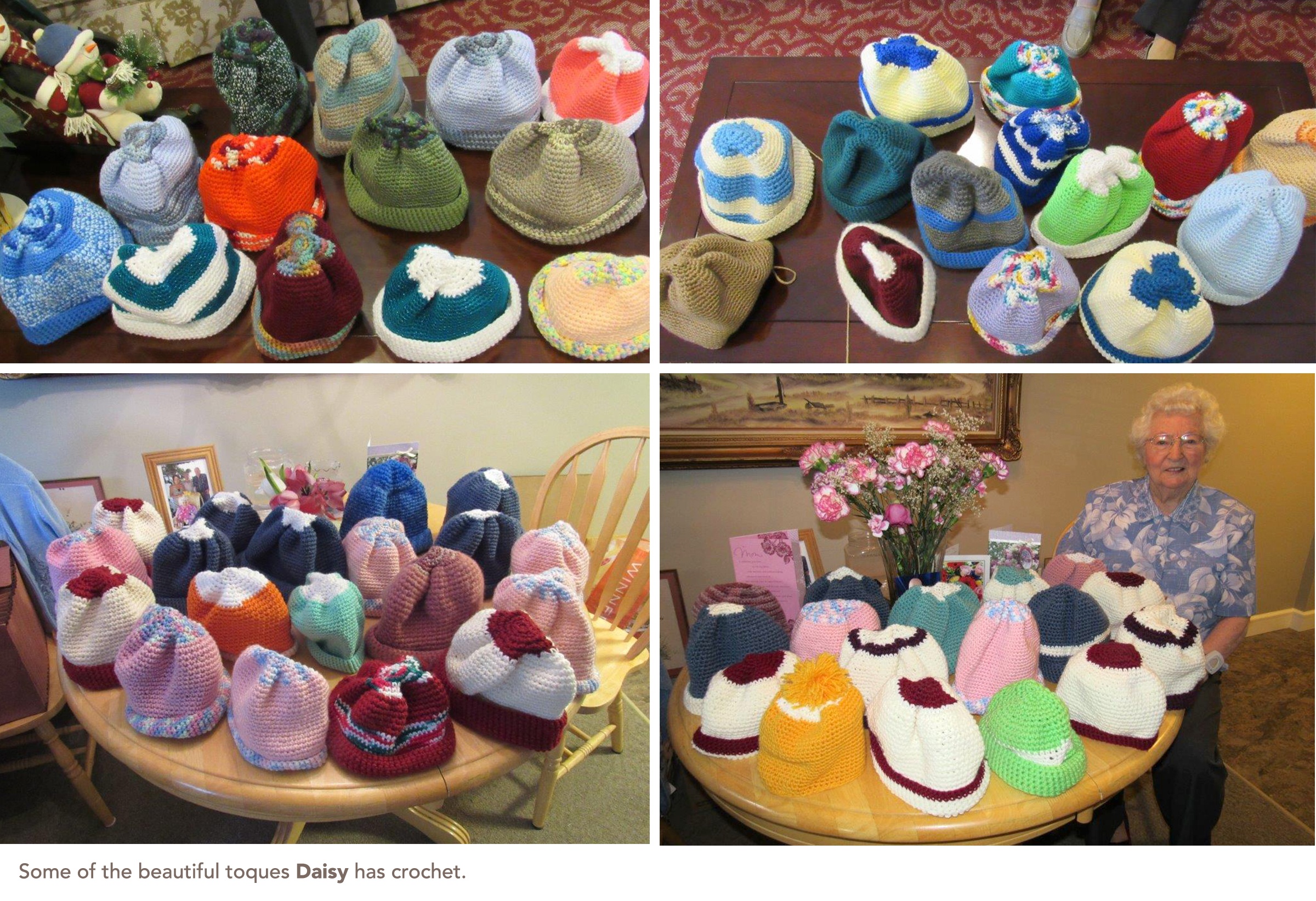 The sound of drums and the shimmer of a tambourine echo down the busy Vancouver street. It’s 1914, Charlie Chaplin is starring in his first film, WWI is on the brink of outbreak, and the first electric traffic light is installed. A streetcar passes by the corner where the Salvation Army band is playing, and the driver calls out to the drummer “you’ll break my windows one of these days!”

“My mother and father met at the Salvation Army in Vancouver, and they married there in 1914,” Daisy said. Her father was a drummer, often heckled by passing streetcar drivers, and her mother played nearly every instrument imaginable, including the tambourine. “I've always admired the Salvation Army, and I know that there are so many homeless people, and I’m sure they’re very cold.”

Over the last few years, Daisy has crochet and donated over 500 toques. They’ve all been donated to the Salvation Army, because of her parents’ story, and because they’ve always been there in her own times of need. She accepts wool donations, and can often be found crocheting by the fireplace at Orchard Valley Retirement Residence in Vernon, where she lives.

It takes Daisy about 6 hours to finish a toque, and because she crochets by the fire for 2 hours in both the morning and afternoon, she completes a hat every day and a half.

“I just feel good about helping people keep warm in the winter,” Daisy said. “I think it's great I've done something useful in my life.”

Daisy first learned to crochet from a friend when she was about 30 years old. Now 90, she’s happy she can still enjoy the hobby, and is very grateful to the Halina Seniors’ Centre for their wool donations.

Daisy doesn’t use a pattern for the hats, and her designs are dependent on the wool she gets. Because of her vision, Daisy tends to stay away from dark coloured wools. Instead, her toques are bright and often multicoloured. She makes them in all different sizes, and tries to consider the user and their preferences whenever possible.

“I make sure the toques cover their ears, otherwise they’d have no use,” Daisy said. “I didn't think I'd make 500, but I guess that was my goal. I'm still going to carry on as long as I can though… I just love crocheting the toques.”

Look inside to see how our residences celebrated the holidays and rang in the new year!
END_OF_DOCUMENT_TOKEN_TO_BE_REPLACED
Stories from our Team

Each month, we’re pausing to recognize some of the outstanding team members who work with us. Thank you for the work you do each day. You are all...
END_OF_DOCUMENT_TOKEN_TO_BE_REPLACED
Inspirational Life

Known for her bubbly personality, Eva (Eve) Dalzell was nominated for the 2021 LEAP Award by the BC Senior Living Association in honour of the...
END_OF_DOCUMENT_TOKEN_TO_BE_REPLACED