As WWII raged on in Russia, the blistering winter cold proved to be as formidable an enemy as the Nazis.
Veteran Stories, Villa Da Vinci Retirement Residence, Ontario, Retirement, Vaughan, ON, WWII

One of the lucky ones 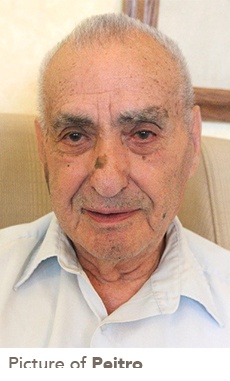 Peitro was a foot soldier in the Italian Army. He completed his training in Como, Milano and Antora. He was then deployed to Russia in October 1943, where he fought along the Sol Don River.

“When I was sent to Russia, there was no food, the snow was 4-feet deep. I was dressed only in light clothing, as were most of the Italian soldiers. It started getting colder and colder every day. The Italian and Russian soldiers started to run away.

“I was sick, my hands were frozen, and one of the Russian soldiers picked me up and put me on a sled. When we got to the encampment, the Russian Captain told the soldier to get rid of me or he was going to shoot me. The Russian soldier brought me to where the other Italian soldiers were, and the Captain put me on his shoulder and carried me to a military truck. I was brought to the Ravenda Hospital in Italy.

“My hands were frozen and had gangrene. The doctors did not want to cut off my fingers, they said that if they will cut them, the gangrene will spread more and I would lose my hands. After one week they started to cut one finger a day for 6 days. I was having a difficult time dealing with this when the Lieutenant came to see me and asked if I had been listening to the news. When I told him yes, he said ‘you are lucky you are not one of 20,000 men who has already died in the war.’

“After that, the Red Cross was coming in to make me eat because I was too skinny. Slowly I started recovering. There was a young student in the hospital, who talked to me and encouraged me all the time. Her name was Anna.

“After four months I was able to go home. I got engaged to a beautiful lady and married her later on. I am one of the lucky ones, because I am still here today.”

Sneih Charan has led anything but an ordinary life. She’s travelled the globe, found love at first sight, and paved her own way through the world.
END_OF_DOCUMENT_TOKEN_TO_BE_REPLACED
Ontario

For Executive Chef Mackenzie Jones, food is what brings people together. Read about his love of cooking and bringing joy to the residents he serves.
END_OF_DOCUMENT_TOKEN_TO_BE_REPLACED