When a bomb dropped in England, Joan wasn’t far behind it. Racing out on the back of a military jeep with her crew, Joan said the life of a military firefighter in WWII was filled with excitement.
Veteran Stories, Muskoka Shores Care Community, Ontario, Long-Term Care, Gravenhurst, ON, WWII, War Stories 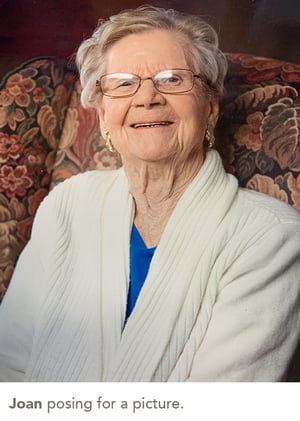 The sirens sounded. The bomb dropped. The fire blazed — and Joan hit the road.

“When a bomb dropped we’d go to the house and put out the fire. We got moved around too much. I don’t even remember all the places. It felt like we’d be in an apartment two hours and we’d be called to go out,” said Joan McIlwain, who is now 100 years old and lives at Muskoka Shores Care Community. “I enjoyed it. We were doing things all the time.”

Born in Aldershot, England in March 1920, Joan came from a family of 12 children. She can still remember joining the British army 79 years ago, in 1941. She joined with two other girls, and her parents begged her not to go.

Initially, Joan and her friends were set to work on typewriters. “I didn’t know what the hell I was doing,” Joan said about her time as a typist. After some time she was moved over to the fire department instead, which she enjoyed immensely.

In her youth, Joan was a self-proclaimed trouble maker. She’d often sneak out of residence with her two best friends, who were also in the service. The trio were caught more than once. As punishment, Joan would be put on potato peeling duty for two months.

“It was with a knife, not a nice peeler like you have now. By the time I finished peeling the potato, there was no potato there!” Joan said.

She loved dancing. Joan never missed a dance, and the Tango was her favourite. She met her husband, Ted, during one of these outings. Ted was a sergeant in the Canadian military. They were married in Aldershot in March 1943.

Unlike Joan, Ted was not a dancer. He’d always take Joan to the dances and watch her have a great time, but didn’t like to participate himself. However, “By the end, I had him dancing,” Joan boasted.

“At the end of the war there were celebrations everywhere you went,” she said.

After the war, Joan worked at a TV station. She and Ted had two sons.

In 1946 Ted returned home to Canada. Two years later, Joan joined him, travelling on the Queen Mary with their two-year-old son, Donald. Their second son, Evert, was born nine years later. The family returned to England at least once a year to visit Joan’s family.

Over the years, Joan unfortunately lost touch with the girls she’d been in service with. “I often wonder where those two girls are,” she said. Her advice for young people would be to have fun while they’re young, and not to get married before they’re 30.

Today, Joan continues to enjoy life at Muskoka Shores Care Community in Gravenhurst, ON, where she lives. She adores love stories, and reads two a day. She also enjoys knitting and bingo. She has one grandson and two great-grandchildren, whom she adores.

Andrew Mathuik, 90, has enjoyed his four years at Aspira, he holds the staff in very high regard, is an active member of the Residents Council and...
END_OF_DOCUMENT_TOKEN_TO_BE_REPLACED
Quinte Gardens Retirement Residence

An avid reader, Joanne Perschick has a passion for books so it’s no surprise that her favourite thing about Aspira Quinte Gardens is the library. She...
END_OF_DOCUMENT_TOKEN_TO_BE_REPLACED