As a mechanic in the air force, Carl had to go up on test flights every few months. At the time, mechanics never tested the planes they worked on. It was fine, until the landing gear didn’t work.
Veteran Stories, Woods Park Care Centre, Ontario, Retirement, Barrie, ON, WWII, War Stories 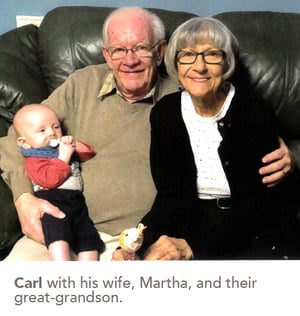 As a mechanic in the Canadian Air Force, Carl Jory could usually be found working on a passenger or training plane. But every two or three months he’d be called to go on a test flight for a plane that another mechanic had worked on.

He was riding in an old bombing plane. Everything seemed to be going well until the pilot tried to put down the landing gear — it stuck.

“There’s not much cushion in an old bomber,” Carl said. “The DC3 [which I often worked on] could cruise for some distance without power, but the bomber would just come down.”

The pilot rerouted them to Calgary, Alberta, where there was foam available for landing in case of fire, but even then it was going to be a rough landing. They were half way there when the undercarriage “came down with a clunk.”

Grateful for the turn of events, the pilot took Carl and the crew back to their original destination, Winnipeg, Manitoba, where they landed safely.

Carl joined the military in 1957. He was 20 years old, and had grown up on his family’s farm in Simcoe County, Ontario. After high school, Carl worked construction; including helping with repairs to bridges after deadly Hurricane Hazel passed through.

As with most recruits, Carl’s first posting with the military was at Camp Borden, a Canadian military training camp. He was chosen to study a trade. Originally, the military asked Carl to study electronics, but he asked if he could do mechanics instead. After training, he was sent to Winnipeg to work as an air force aero engine mechanic.

While in Winnipeg, Carl met his first wife, and they were married in 1959. They had two children.

He stayed in the forces for five years. Afterwards, he worked at Canadian Tampax, which is where he met his current wife, Martha. The two were married in 1986.

After Tampax, Carl worked at Molson Brewery as a maintenance mechanic. He retired after 24 years.

“I never regretted joining the forces,” Carl said, “and, indeed, I think I was smart to do it.”

Today, Carl and Martha continue to enjoy life at Woods Park in Barrie, ON. They can often be found dancing at the live entertainment, and Carl continues to enjoy reading. Carl now has three grandchildren, and one great-grandson.

Andrew Mathuik, 90, has enjoyed his four years at Aspira, he holds the staff in very high regard, is an active member of the Residents Council and...
END_OF_DOCUMENT_TOKEN_TO_BE_REPLACED
Quinte Gardens Retirement Residence

An avid reader, Joanne Perschick has a passion for books so it’s no surprise that her favourite thing about Aspira Quinte Gardens is the library. She...
END_OF_DOCUMENT_TOKEN_TO_BE_REPLACED