77 years with a metal heart 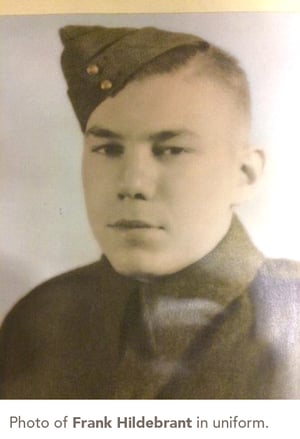 At 19, Frank Hildebrant shipped out with the rest of the Winnipeg Rifles for Holland. It was 1943, the middle of WWII.

“For two days we were just walking along and didn’t see any [Nazis] at all, and we were just checking the houses and stuff,” Frank said.

Everything changed the next day.

“There were some tanks out there. One of them fired and I got hit,” he said. “I didn’t feel anything. I just grabbed my riffle and held it.”

Frank was immediately put on a stretcher. The nearest jeep took him to a field hospital, where he spent the night, before being transferred to a hospital further from the frontlines.

Frank joined the army in 1942, at the age of 18. He grew up in a very small town near Regina, Saskatchewan, and had a job with the Canadian Pacific Railway. Because of his job with the railway, Frank didn’t have to join the army, but he didn’t realize his job was considered an essential service at the time. Besides, as Frank said, “Well, somebody had to go over there.”

Frank was almost immediately sent overseas to Holland with the Winnipeg Rifles. After he was shot, Frank spent three months in hospital before returning to his battalion to continue fighting in the war. To this day, 77 years later, Frank still has shrapnel in his chest from the incident.

When the war ended, Frank said he was sitting in convalescence, in a large hotel on the waterfront.

“There was a huge celebration with everyone in town,” Frank said.

Afterwards, Frank was part of the occupational force in Germany for a year and a half. He left the army in 1947 and returned home, where he returned to his job with the Canadian Pacific Railway, which had been waiting for him.

In 1952 he married Louise, whom he first met when he was 16. They had a daughter, and a wonderful life together. Frank worked his way up the ranks, eventually becoming an engineer with the Canadian Pacific Railway. Louise worked as a hairdresser and had jobs around the world, even working in New York City at one time.

Today, Frank is 96 and continues to enjoy life at Cherry Park Retirement Residence in Penticton, ON. He enjoys the residence’s happy hours, yoga classes, and trips.

“We’re staying in a very good place,” he said.

Look inside to see how our residences celebrated the holidays and rang in the new year!
END_OF_DOCUMENT_TOKEN_TO_BE_REPLACED
Stories from our Team

Each month, we’re pausing to recognize some of the outstanding team members who work with us. Thank you for the work you do each day. You are all...
END_OF_DOCUMENT_TOKEN_TO_BE_REPLACED
Inspirational Life

Known for her bubbly personality, Eva (Eve) Dalzell was nominated for the 2021 LEAP Award by the BC Senior Living Association in honour of the...
END_OF_DOCUMENT_TOKEN_TO_BE_REPLACED