In the fall of 1944, the hum of a single airplane broke their serenity as it streaked across the sky.
Veteran Stories, Inspirational Life, Love Stories, Woods Park Care Centre, Ontario, Retirement, Barrie, ON

Finding happily ever after 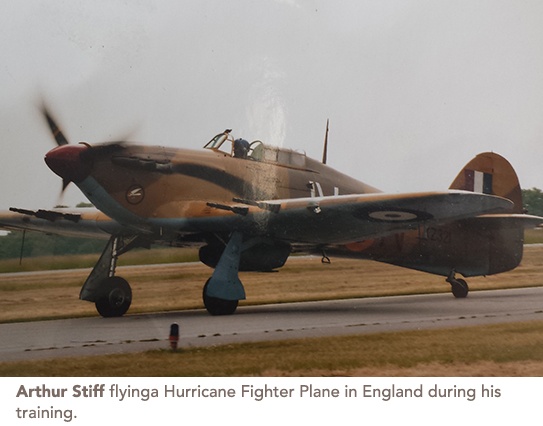 The waters in the Bristol Channel are clear and glitter in the sun. In the fall of 1944, the hum of a single airplane broke their serenity as it streaked across the sky.

Arthur Stiff, who was a Hurricane Fighter Pilot in WWII, was searching for a bright-yellow tugboat carrying 50 escaped prisoners of war. The German pilots had escaped their camp in Wales and stolen a yellow aircraft tender, which is a small boat used to refuel sea planes. The escaped prisoners were making their way down the Bristol Channel and heading for Ireland, where a German U-boat was stationed to take them back to Germany.

“Now, the Bristol Channel is so big that it’s like looking out at an ocean, you can’t see from one shore to the other, it’s just too wide,” said Arthur.

The yellow boat was spotted at about 1 p.m., and Arthur flew out to keep an eye on their position, hoping that the British Navy showed up before the U-boats.

After nearly half an hour of circling the boat, Arthur could see the British Navy on the horizon.

Arthur was born in Toronto, Ontario, in May of 1922, to a fur-trading family. As a young teen he “was stuck on” making and flying model airplanes, which at the time were powered by an elastic band. He’d also often ride his bike out to Wilson Heights on the weekend to watch people learning how to fly Tiger Moth airplanes.

“That’s what got me into planes and the desire to be a pilot, the desire to fly rather than be in the army or the navy,” Arthur said.

In 1943, at the age of 20, Arthur married Florence, whom he had known since he was 16. Arthur signed-up for the air force only a few months later, leaving his new wife and his job at the family business, before he turned 21 and was conscripted into the army.

Arthur received his wings in March 1943 in Camp Bordon, Barrie. After that he should have had two weeks of leave to spend with his family, but the air force had other plans.

“Suddenly I’m shipped overseas from getting my wings,” Arthur said. “They rushed us down to the east coast and sent us over to England. There were 12,000 military people onboard that ship, but they were rushing us to get us into England prior to the D-Day landings.”

Once they landed in England, Arthur was transferred from the Royal Canadian Air Force to the British equivalent: the Royal Air Force. He would stay with them until the end of the war.

“Now we landed in England knowing how to fly,” Arthur said. “But we don’t know how to fly in a war.”

Arthur underwent additional flight training in England for six months. The D-Day landings took place only two months after he arrived in England, and though he didn’t fly in them, he can remember seeing the planes coming back in.

“I witnessed the parachutists flying over in squadrons of planes and returning with the cables hanging out of the side door where the parachute is,” he said. “They anticipated 10 per cent air losses on the D-Day landing, and instead of having 10 percent air losses they had .05 per cent. They thought the Germans were holding their air forces back, knowing that the landing was imminent.”

They later learned that the Germans hadn’t been holding back ― they didn’t have the air force the allies believed they did. Regardless, because their losses were less than expected, many pilots in the Allied Forces were kept in Britain as part of the reserves. 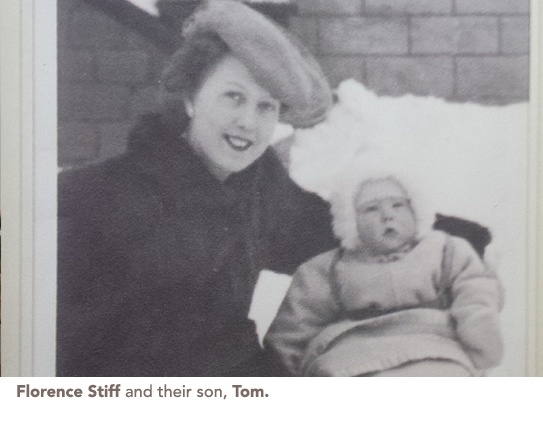 Back in Canada, Florence, Arthur’s wife, worked as a telegraph operator. She received Morse code messages from Ottawa, most of them containing horrible news from overseas that she would have to help deliver to a soldier’s family.

“I had to have a minister deliver the messages to anyone who had lost someone… and the thing was, I was always hoping the next one wasn’t for me. Every message, but I was lucky,” Florence said. “It was difficult, but I wasn’t the only one in town that was having a tough time. You can’t feel sorry for yourself. There are others who have the same problem.”

Even though he wasn’t usually in the line of enemy fire, Arthur and his friends faced other obstacles during their missions, the worst of which was the weather. Arthur said that often when they flew out it would be to clear skies, only to have the fog creep in 10 minutes later, destroying their visibility. To make matters worse, they had 2,000 foot mountains behind their runway, and when the fog settled down-to 500 feet it would hide the mountain peaks. On top of this, four to eight planes could be coming in to land at the same time. The maneuvers often got quite dangerous.

“You were practically skipping over the trees, but you didn’t want to take your eyes off the ground. That’s a hairy situation, we didn’t like it at all,” Arthur said. “We flew in weather, most of the time, where the birds wanted to walk.”

It was while Arthur was coming in from a cross-country trip that air control came in over the radio.

“I’m out in the air coming back into the airport. As I join the final flight into the airport, they come on the air and they say ‘Flying Officer Stiff, you’ve just become a new father. We just got a telegram in from Canada. Congratulations.’ And then they proceeded to talk me in, meanwhile there’s 2,000 people listening to all this going on, you see, so when I got down, everyone knew I was the new father.”

Arthur was treated to drinks at lunch. Later, he received a letter from Florence.

“After that first baby was born I wrote to him and said ‘you’re having the next one,’” Florence said with a laugh. 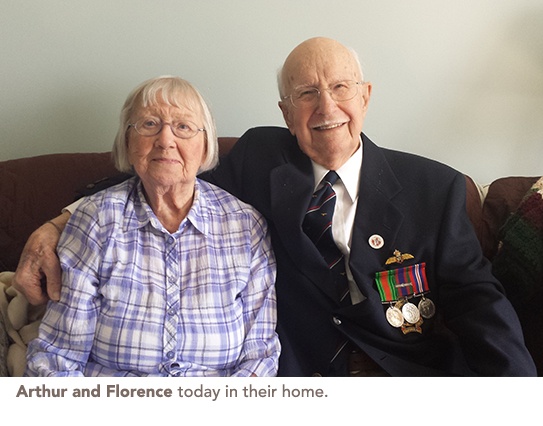 After the surrender of the Germans, Arthur was sent by boat back to Canada, with 30 days leave, before he was to be sent to fight against the Japanese.

“I’m going out to fight the war in Japan, and while we’re in the mid-Atlantic the Americans dropped their atomic bomb, and the war, suddenly, was over like that,” he said. “By the time we landed in Quebec City the war was over. And I say, I can still almost break out in tears now. What a joy it was. We were the second troop sent home after the Second World War, and they had tugboats in the river, playing jazz music.”

He travelled back to Toronto by train. At the time, Florence was staying with her family in Midland, Ontario.

“I didn’t see my son until he was 15 months old,” he said. “I used to say to him, ‘Tom do this’ and he’d look at me and he’d say ‘who the heck are you?’ you know, and I was used to, as a military officer, when I told someone to do something they’d snap their heels and do it, you know what I mean?” he said with a laugh.

“And I told him I wasn’t his bat boy,” Florence said.

Five years later they had a daughter. Arthur went back to school and became a teacher. He taught industrial arts, math and science in North York for 25 years. He and Florence recently celebrated their 73 wedding anniversary and are happily enjoying their retirement at Woods Park Care Centre in Barrie, which is only a block or so from their daughter’s house. When asked if they would change anything, they both said no.

“We lived happily ever after,” Florence said.

Bob first met Ann when she was only two months old — it’s a meeting he can’t remember, as he was only a month older.
END_OF_DOCUMENT_TOKEN_TO_BE_REPLACED
Inspirational Life

Known for her bubbly personality, Eva (Eve) Dalzell was nominated for the 2021 LEAP Award by the BC Senior Living Association in honour of the...
END_OF_DOCUMENT_TOKEN_TO_BE_REPLACED