It is one of the first times Ted Phillips has danced in nearly 10 years.
Innovative Programs, Inspirational Life, Royale Place Retirement Residence, Ontario, Retirement, Kingston, ON

After 10 years, Ted is finally back on the dance floor 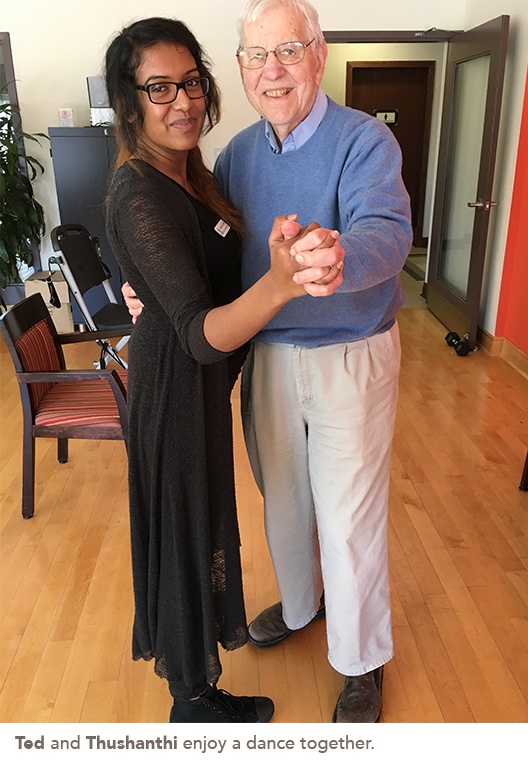 Music plays over the PA system of a nearly-empty dining room. Breakfast is over. Among the empty chairs and deserted plates, Ted and Sophie are dancing.

It is one of the first times he has danced in nearly 10 years.

Ted Phillips started dancing as a teenager. He’d almost always attend Friday night dances at his high school, which were well organized and had live music. He taught himself to dance, and avoided the jitterbug whenever possible.

After high school, a four-year stint in the US Navy and four years of university, Ted became a librarian. In 1966 he moved to Canada.

“I arrived in Kingston around New Year’s Eve 1966,” said Ted. “From California, believe it or not, in the middle of winter.”

The snow didn’t bother Ted, who’d lived in snowy places before. Before retiring he worked at three university libraries in Canada—two in the Maritimes and one in Ontario. At some point he got married; and while a lot had changed in Ted’s life since high school, his love for dancing had not. He and his wife would often go out dancing. “I did it for so long… I just, it was just part of my life,” said Ted.

But that was before his wife went into long-term care with dementia and he slipped on the ice, breaking his left kneecap and his right arm.

Now, Ted can barely remember the last time he danced.

“It’s been several years, I don’t know… Eight? Ten?” said Ted. “I really can’t be sure of the last time my wife and I went dancing.”

Ted moved into Royale Place Retirement Residence in Kingston nearly a year ago. Soon after, he joined the Live It Fit Everyday (LIFE) program, a personalized, 8-12 week physical-activity program run by student occupational therapists and fitness health students. The program is geared to resident goals and has both group and one-on-one activity sessions. Ted has gone through the program twice and is signed-up for a third.

Ted prefers the one-on-one sessions. “I thought that was great because she stood there and led me through the exercises,” he said. The students also leave him exercises to do on his own, which he does most of the time. Ted said he thinks the one-on-one sessions are a great idea because they encourage people to do their exercises even when the occupational therapist isn’t around.

Since signing-up for the LIFE program, Ted’s mobility has improved. So much so, that he began thinking about dancing again.

Ted’s CD player is in use almost every night. One night, K.D. Lang’s voice filled the room while he read a book, already tucked into bed. It was a slow song, and while Ted lay there, he began to wonder.

“That’s a nice little piece,” he thought. “That’s a danceable piece of music… I wonder if I could...”

Ted put his book down and got up to his walker. He stood and began to move his feet, finding that he could move to the music.

“I thought, wow I can do this! I can move my feet to the music!” said Ted. “I thought, well I wonder if I can dance with somebody, a real person instead of my walker…”

Thushanthi, a student occupational therapist, worked closely with Ted during his second round in the LIFE program. One week into her work with Ted, he wanted to try dancing.

“We practiced dancing to one song, and I remember at the end of the track he was so happy, that he hugged me and said, ‘I can’t believe I did it,’” said Thushanthi. Thushanthi said that she and Ted continued practicing dancing whenever they had a session. She slowly increased the number of songs they danced to, and employees told her Ted often danced on his own with his walker.

For the first time in years, Ted was dancing again.

“Once I got going it just felt so natural,” said Ted. “That’s the only way I can put it, it felt like, well I can almost say it felt like it should have happened. I was so pleased with myself that I could do it, and it just made me feel good all over that I was able to do it after all these years.”
The first weekend after dancing with Thushanthi, Ted got a chance to dance with his two daughters.

Ted has danced with five people since his experience with the LIFE program. Thushanthi and another student working at the time; his two daughters; and Sophie, a friend of Ted’s granddaughter who works at Royale Place.

At the end of their time together, Thushanthi and Ted danced in front of the LIFE group session.
“I remember,” said Thushanthi, “When we were dancing together in front of the residences, I could see the joy in Ted’s face every time I glanced up to look at him.”

Sneih Charan has led anything but an ordinary life. She’s travelled the globe, found love at first sight, and paved her own way through the world.
END_OF_DOCUMENT_TOKEN_TO_BE_REPLACED
Inspirational Life

Sneih Charan has led anything but an ordinary life. She’s travelled the globe, found love at first sight, and paved her own way through the world.
END_OF_DOCUMENT_TOKEN_TO_BE_REPLACED
Inspirational Life

Andrew Mathuik, 90, has enjoyed his four years at Aspira, he holds the staff in very high regard, is an active member of the Residents Council and...
END_OF_DOCUMENT_TOKEN_TO_BE_REPLACED