What happens when seniors become pen pals with 11-year-olds?

A wide smile spreads across two faces, one shy, the other filled with wonder. Between them is a painting of a tree with circular, rainbow leaves.

“Did you paint this?” Norma, a resident at Weston Terrace Care Community in Toronto asks her pen pal, a Grade 5 girl from Banting and Best Elementary School.

The girl nods, and the two hug. This is the first time they’ve seen one another face-to-face, though they’ve been exchanging letters for six months. Around them, the room is filled with similar exchanges as 30 seniors meet their pen pal for the first time.

The pen pals first began exchanging letters and crafts in December 2016, right before the winter holidays. Since then they’ve received mail from their pen pal each month.

Nadine Ryan, an activation aide at Weston Terrace, delivered the letters to the children at the school before work on Wednesdays.

“The children see me and they know I’m coming with something,” Nadine said. “They get very excited about getting their mail and handing it out to each other.”

“The residents look forward to the letters too. They’re always asking about the kids, and they’ve got that excitement and anticipation of looking forward to hearing from them,” Nadine said. 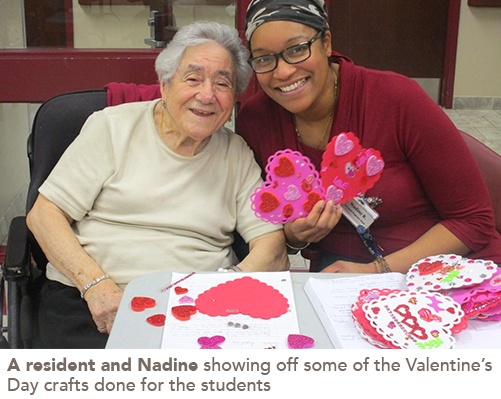 The idea of a pen pal program arose out of Nadine’s desire to bring the two generations together. She thought that a pen pal program would be perfect, because for the seniors letters are how they’ve always communicated, and for the students it was a chance for them to discover the joys of receiving and waiting for mail.

When they arrived at Weston Terrace, the students first played a few songs for the residents, before being welcomed by David, president of the residents’ council.

David said that while the students and residents might have a lot of differences, they did have at least one thing in common.  “Looking around, those of you from Banting and Best may not realize it at first, but all of us here are secretly members of the Justine Bieber fan club.”

After his speech, the students met their pen pals for the first time. They each gave their senior a painting, and spoke for a few moments before escorting one another into the next room for games.

The pairs played a Ping-Pong bouncing game, where they tried to bounce a Ping-Pong ball into an egg carton for points; enjoyed snacks and chatted with their partner; and played table bowling. At the end of their visit, they gathered together for a BBQ lunch and cake.

“Today was really fun and it was really exciting to have this experience,” one of the students said while waiting for their turn at Ping-Pong. “I’ve never been to a [care community], and so I wanted to see what it was like.” 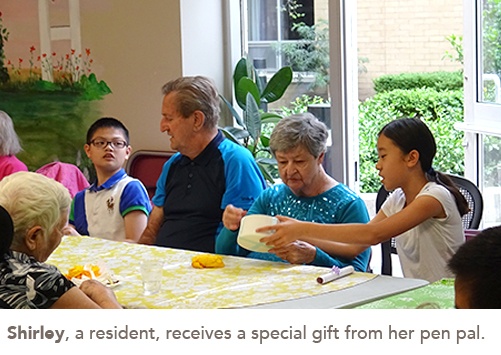 Laughter filled the activity room as lunch came to a close and the students got ready to go. At the last minute, one young girl snuck into the side room that was holding the students’ instruments and bags. She returned a second later with a round, white box tied with blue ribbon and presented it to Shirley, her pen pal.

The two talked quietly while Shirley opened up the box, a wide smile on her face. Inside was a small picture frame and a few other items. Between this gift and the painting of the tree, which all the residents were gifted, Shirley will always have something to remember her pan pal by.

“It was very nice,” Shirley said later about the gift, looking pleased. “Everything about the day was great!”

Sneih Charan has led anything but an ordinary life. She’s travelled the globe, found love at first sight, and paved her own way through the world.
END_OF_DOCUMENT_TOKEN_TO_BE_REPLACED
Quinte Gardens Retirement Residence

Sneih Charan has led anything but an ordinary life. She’s travelled the globe, found love at first sight, and paved her own way through the world.
END_OF_DOCUMENT_TOKEN_TO_BE_REPLACED