The sweetest sound I ever heard 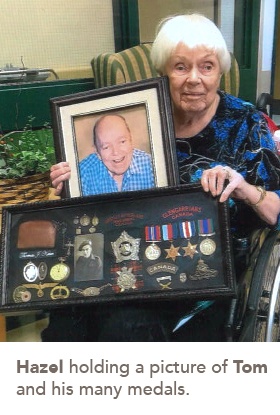 Story written by Hazel, a resident at Deerwood Creek Care Community in Etobicoke, ON, in memory of her husband, Thomas Keen.

Tom rarely talked about his experiences during WW2, but twice he mentioned recollections that do stand out. Tom left home with a school friend and they chose to volunteer with the Argylls. As luck would have it, they were placed in the same company and travelled with the regiment to Scotland and then on through France and Belgium to Holland.

The men of the Argylls spent over 10 months fighting continuously in north-west Europe from July 1944 to 1946. Over this time, there was constant forward movement accompanied by fatigue as they continued their success against the German army through Falaise, Moerbrugge, the Scheidt, Kapelsche Veer, the Hochwald Gap, Friesoythe, the Küsten Canal, and Bad Zwischenahn.

He mentioned only one personally tragic incident. During one attack across a large field, Tom's company came under strong German fire. He and his friend ran towards cover -but as Tom looked back, he saw that his buddy had been shot, yet was still trying to run ... then was quickly felled by a second fatal shot. Tom made it to safety. Given this type of experience, it's understandable why he avoided talking about the war.

On a far lighter note, the only other story I remember Tom telling was about an episode that occurred very near the end of the war. While he and his company rested at the side of a road, Tom heard voices in the far off distance, but couldn't see anyone or distinguish the sounds. As he waited there, the sound came closer and became more clear. It seemed absurd yet pleasurable to him when he realized that the sound was hundreds of German prisoners of war marching toward him singing his favourite song, 'Lily Marlene' in harmony. "The sweetest sound I ever heard,' he said.

Many of the singing prisoners of war had smiles on their faces as they marched passed him. For them the war was over... and Tom reckoned that his part in the war would soon be over too.

For Executive Chef Mackenzie Jones, food is what brings people together. Read about his love of cooking and bringing joy to the residents he serves.
END_OF_DOCUMENT_TOKEN_TO_BE_REPLACED
Villa Da Vinci Retirement Residence

Helen Tonus, 89, has profiled about 120 team members at Villa Da Vinci Retirement Residence in Vaughan, ON, where she lives. Helen has lived at Villa...
END_OF_DOCUMENT_TOKEN_TO_BE_REPLACED