Imagination and a horse named Shorty 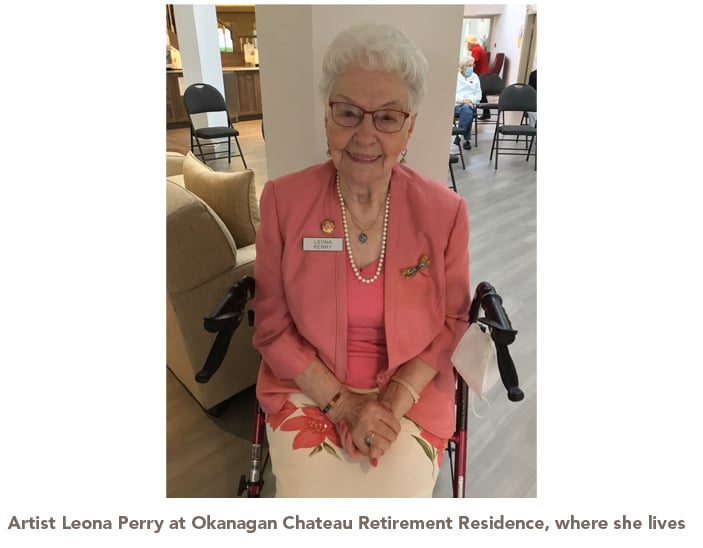 Leona didn’t start painting until after her retirement in 1980. Since then, she’s completed 160 paintings and has sold most of them.

Leona has been living at Okanagan Chateau Retirement Residence in Kelowna, BC for the last 15 years. She enjoys going to the horse races and attending the many activities offered at The Chateau, including bingo, exercise classes, and the bi-weekly happy hour. She enjoys spending time with other residents and says she gets along with everyone.

This year, her artwork was chosen to be featured on the Sienna Senior Living Holiday Card. The painting is of a beautiful winter scene.

“I just loved old covered bridges like that,” Leona said when asked about the painting. “Shorty was real, but everything else was from my imagination.”

Shorty was Leona’s childhood horse. Although he was a quarter horse, which are known for their ability to run quarter-mile races, he was incredibly gentle.

“When I was young, I could go around and hold his tail,” Leona said. “I just loved that horse.”

Leona was born in April 1925 in Bonnyville, Alberta. She was the oldest of 11 children. Her family owned a quarter-acre farm, which had a variety of animals. Shorty came to her family in the 1920s.

After school, Leona studied nursing and moved to British Columbia. Leona worked as a nurse in Victoria Hospital, in a women’s medial centre. Her sister already lived in Penticton, BC. While visiting a friend in Vancouver, Leona was introduced to her future husband, Freeman Perry. Freeman had been in the air force during the war. When the war was over, he turned to cooking and baking.

They were married in 1946 and had two children, a son and a daughter. Leona continued to work as a nurse until 1965, when she and Freeman bought the Town and Country Bakery in Victoria, BC. Freeman had worked in the bakery and helped manage it prior to them taking the property over. They ran the bakery for 15 years and retired in 1980. It was not until then that Leona was able to rekindle her love of art.

“After I retired I started painting. I had always wanted to paint,” Leona said.

She went to the local college and took art classes for two years. Since then, she’s completed over 160 paintings, most of which she has sold. 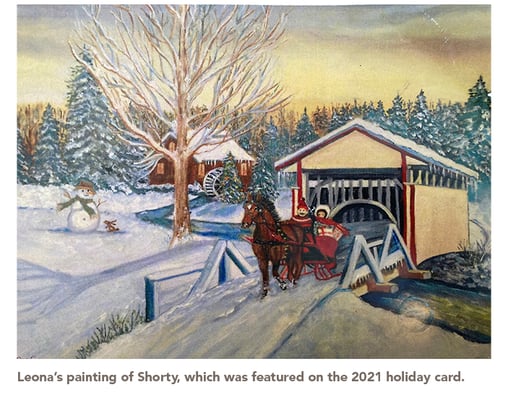 “My teacher, Adrian Williams, said that ‘to be a great painter, you have to have a great imagination and a feel for things,’” Leona said.

She was very excited to have her work featured on the Sienna Holiday Card.

“I’m happy that people will get the card for Christmas,” Leona said. “I hope they enjoy my horse, Shorty.”

A story from Island Park resident Bob BennettOn a Sunday afternoon late last June I decided to go for a walk in Ferris Park by the way of the...
END_OF_DOCUMENT_TOKEN_TO_BE_REPLACED
Inspirational Life

Sneih Charan has led anything but an ordinary life. She’s travelled the globe, found love at first sight, and paved her own way through the world.
END_OF_DOCUMENT_TOKEN_TO_BE_REPLACED
Quinte Gardens Retirement Residence

Meet the winner of the 2018 OLTCA PSW Leadership Award
END_OF_DOCUMENT_TOKEN_TO_BE_REPLACED