Helping the voices be heard 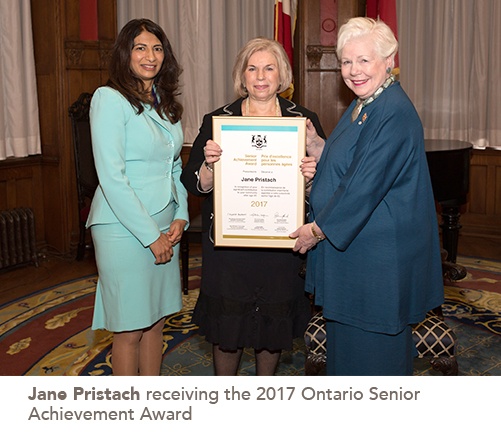 Jane Pristach has always looked out for those who need her help.

Jane was only 12 when her younger brother contracted Polio. The disease left him in a wheelchair, which she pushed to school every day for four years, protecting him from bullies.

“I used to take him to all the school activities and everything,” Jane said. “I had a great mentor — my father believed in respect, caring, education, and the idea that everybody deserves a chance. That was something that was in our family and became a centre of my life.”

In late November 2017, Jane was a recipient of the 2017 Ontario Senior Achievement Award for her work as the executive director at Norfinch Care Community in North York. Jane was 65 years old when she began working at Norfinch as a director of care, having been called out of retirement to take the position.

Jane had not applied for a position, and was touring Paris, France when she got the call.

She told them she would be back in Canada in a few days. Shortly after that, she got the job as a director of care at Norfinch Care Community in North York. Five years later, in 2010, she became the executive director.

“I’ve always felt that the elderly are not well represented in our society. It's a society of young people and progress, so elderly people are always on the back burner. And I think we don't advocate enough for them, because they don't have a voice the way the majority of people do. That's why I chose this profession,” Jane said. “I advocate for the residents simply by going around and talking to them and asking them questions. How do they feel? How can we help to make their life better, happier? I think just connecting with the residents on a daily basis is really what allows me to make changes.”

During elections, Jane often invites Ministers of Parliament to Norfinch to speak and encourage residents to get out and vote. Many residents, Jane said, are still perfectly capable of voting, and so they should be able to. She’s also circulated petitions asking the government to increase the funding for long-term care, and is constantly trying to find new ways to improve the lives of those she serves. 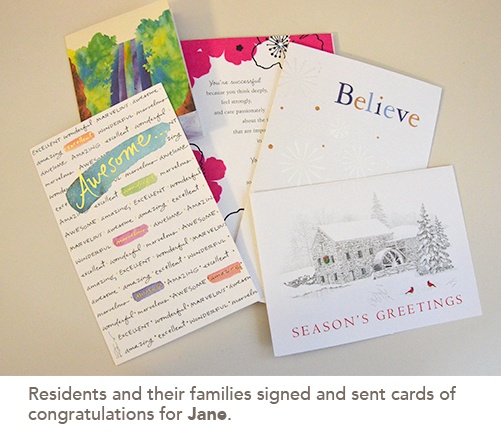 At Norfinch, everyone believes that Jane knows everything going on at the community. The opinion is so strongly held that some residents and family were convinced Jane would discover the plans for her surprise party before it happened.

“The family and resident councils wanted to do a surprise for Jane, and the first thing that the family council said to me is ‘are you sure you're going to keep it from Jane? Because Jane knows everything that happens,’” said Gajany Sivalingam, resident relations coordinator at Norfinch. “They know Jane so well because she's very involved in every aspect. They wanted us to get cards at reception for all the residents and the family to sign.”

Jane was surprised by her party, and honoured by the cards presented to her by the resident and family councils.

“My purpose is to change the culture so that seniors have a voice and are respected,” Jane said. “Seniors worked very hard to build society, to build this country. They raised us. So I think they deserve the best, and that's my purpose.”

For Executive Chef Mackenzie Jones, food is what brings people together. Read about his love of cooking and bringing joy to the residents he serves.
END_OF_DOCUMENT_TOKEN_TO_BE_REPLACED
Villa Da Vinci Retirement Residence

Helen Tonus, 89, has profiled about 120 team members at Villa Da Vinci Retirement Residence in Vaughan, ON, where she lives. Helen has lived at Villa...
END_OF_DOCUMENT_TOKEN_TO_BE_REPLACED
Stories from our Team

Each month, we’re pausing to recognize some of the outstanding team members who work with us. Thank you for the work you do each day. You are all...
END_OF_DOCUMENT_TOKEN_TO_BE_REPLACED