Mark has always had a passion for hockey. Thanks to the work of the recreation team, it’s a passion he continues to enjoy.
Innovative Programs, Brookside Lodge Care Community, British Columbia, Long-Term Care, Surrey, BC

For the love of the game 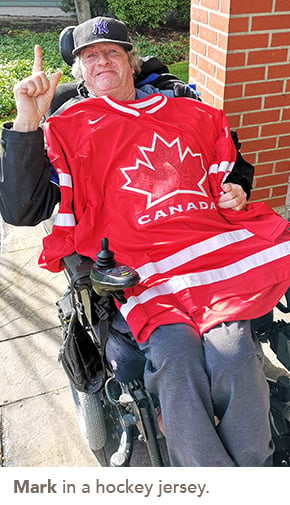 Brookside Lodge resident Mark started playing hockey at the age of six, and it became a lifelong passion. He was drafted to play with the Chicago Blackhawks as a teen, but an injury prevented him from pursuing his career in the NHL. Hockey remained a big part of his life. When he moved to Brookside Lodge Care Community in Surrey, BC, the therapeutic recreation team learned of his passion for hockey and ensured he could make it part of his everyday activities.

“One of our main goals when Mark moved in was to work to fill his day with meaningful and purposeful tasks and to have him give back to the community he lives in,” says Meghan Brooks, director of therapeutic recreation programs.

His favourite outings have included attending Vancouver Giants hockey games, or playing sledge hockey at the local leisure complex. He loves to discuss the previous night’s hockey highlights each morning, and even shares his love of the game in his Brookside newsletter column, “Hockey Corner with Mark.” Mark shares that he is grateful to the therapeutic recreation team, and that he feels supported in his passion for sports. He described feeling “involved, connected, and included” and “an important part of the community.”

Meghan reflects that “working with Mark has been extremely rewarding as we have been able to support in adapting past leisure interests into new ones and use positive leisure to enhance each day.”

For Executive Chef Mackenzie Jones, food is what brings people together. Read about his love of cooking and bringing joy to the residents he serves.
END_OF_DOCUMENT_TOKEN_TO_BE_REPLACED
Island Park Retirement Residence

Look inside to see how our residences celebrated the holidays and rang in the new year!
END_OF_DOCUMENT_TOKEN_TO_BE_REPLACED
Stories from our Team

Each month, we’re pausing to recognize some of the outstanding team members who work with us. Thank you for the work you do each day. You are all...
END_OF_DOCUMENT_TOKEN_TO_BE_REPLACED