“When you pick a bomb up you never know if it will go off, because it’s already armed,” said Don, who removed and disarmed faulty shells during the Korean War.
Veteran Stories, Woods Park Care Centre, Ontario, Retirement, Barrie, ON, WWII, War Stories

Disarming bombs on the frontlines 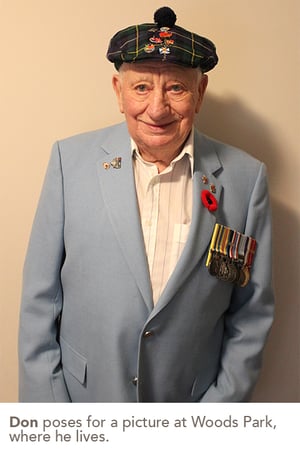 According to the medics, Don McNeil had no business being anywhere near combat. But here he was, picking up armed bombs that had failed to go off near the frontlines of the Korean War.

“When you pick a bomb up you never know if it will go off, because it’s already armed,” Don said.

Don worked as a driver and bomb specialist during the Korean War, but originally, he wasn’t supposed to be overseas at all.

Born in 1931 in Cape Breton Island, NS, Don’s father died in a coalmining accident three months before he was born. Because of this, Don had no interest in going into mining himself. Unfortunately, mining was one of the only jobs available in Cape Breton at the time, which lead Don to joining the military in 1951.

At 20 years of age, Don weighed only 120lbs, making him medically unfit for combat.

“They sent me on vocation leave, and when I returned the major sent me to Korea anyways,” Don said.

The journey to Korea took nine days by boat. Don said many of the soldiers got sick, and they were only allowed above deck twice during the voyage.

Don arrived in Korea in 1952 as part of the 1st battalion of the Royal Canadian Regiment and was almost immediately sent to work near the front as a driver and mechanic.

As a driver, he often transported people and materials to the trenches. He can remember a few close calls.

“A shell came in and hit the sides of the ditch [beside the truck]. I was sent flying,” Don said. Despite the 59 holes in his truck, Don was miraculously not hit by any shrapnel.

“When I was driving, I was mostly picking up old explosives. If a shell landed and didn’t go off, I had to go pick them up and take them somewhere safe to set off.”

At first, Don would only collect the explosives and someone else would set them off. After some time, the military sent Don for special training in Japan to teach him how to safely set the bombs off, allowing him to do both jobs.

The war ended 11 months after Don arrived in Korea. After the war he returned home, where he reconnected with Mary Jane, a girl who lived nearby.

Don stayed in the air force for 24 years. He was stationed in France at the United Nations headquarters just outside of Paris. He retired from the service in 1980 as a Master Corporal. He received seven medals while in service.

After his retirement, Don went on to work as a civil servant ammunition technician at Base Borden until 1993. Mary Jane, his wife, also worked at Base Borden as an invoice supervisor from 1967 to 1997.

Don and Mary Jane had three children and now have six grandchildren. They continue to enjoy life at Woods Park Care Centre in Barrie, ON. They enjoy visiting family, and playing cards and games.

When asked if he had any advice for young people, Don said, “If you want to join, join the air force.”

Andrew Mathuik, 90, has enjoyed his four years at Aspira, he holds the staff in very high regard, is an active member of the Residents Council and...
END_OF_DOCUMENT_TOKEN_TO_BE_REPLACED
Quinte Gardens Retirement Residence

An avid reader, Joanne Perschick has a passion for books so it’s no surprise that her favourite thing about Aspira Quinte Gardens is the library. She...
END_OF_DOCUMENT_TOKEN_TO_BE_REPLACED