As a flight lieutenant and navigator on a heavy bomber in WWII, Joseph is no stranger to watching bullets rise up from the ground. 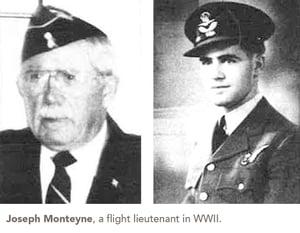 Anti-aircraft ammunition streaked by them, missing them by inches — until it didn’t.

“Our flight engineer had just left our aircraft astrodome when it was blown off, missing him by seconds,” wrote Joseph Monteyne, a flight lieutenant in WWII. “Damage was also sustained to one engine, which had to be shutdown.”

Joseph sat as the navigator beside the pilot in a heavy bomber. They were part of a bomber stream headed for the airport in Dusseldorf, Germany, which was being used as a military base. It was a three-hour flight, and all had been going well until now. The fire was so furious and accurate that Joseph believes one of the crew in their formation must have accidentally hit the wrong switch and broadcasted their internal communication, including their flightpath.

“We managed to bomb successfully and keep up with the bomber stream,” Joseph wrote. “On our way home, even while flying at a lower level, the aircraft was very drafty and cold. We decided we should look for a place to set down, as the Met in Northern England was not too promising.”

Joseph and the pilot decided to land at the 8th USAAF Station in Sudbury, which was a nearby American base. Joseph called in their credentials to the base.

They landed at 4:15PM on Christmas Eve. It took three days for their plane to be repaired and deemed flight-worthy, but they all survived.

“December 24, 1944 stands out in my memories of service in the RCAF mainly because of the close call our flight engineer had,” Joseph said. “[but also because of] the wonderful Christmas party we shared with our American cousins.”

Joseph was born in 1921 in Manitoba, Canada. He had six siblings, and worked in retail building supplies from a young age, taking his Grade 12 by correspondence.

He signed up for the Royal Canadian Air Force in 1942, at the age of 21. One of his brothers also joined the war effort, and fought as part of the Northern Holland Front. His brother was wounded three times, but survived the war. Joseph was quickly stationed in Yorkshire, England as part of the 425 Squadron (Alouette).

As a navigator on heavy bombers, Joseph had plenty of close calls, saying, “Flak was always heavy.” He received the Distinguished Flying Cross and the French Legion of Honour during his three years of service.

After the war, he went back to his work in retail building supplies. Later, he began doing construction in Northern Alberta. He met his future wife, Noellie at her uncle’s house. The two were married in 1947 and had five sons.

In 1980, Joseph studied real-estate appraisals and got his degree. Today, he is 99 years old and continues to enjoy life at Orchard Valley Retirement Residence in Vernon, BC.

When asked what advice he would have for the next generation, Joseph said, “[I] believe one year [of] service would benefit young men.”