Today, the world is at our fingertips. A few swift clicks can deliver our photos to all our friends and family, no matter where they live… But what happens if you can’t navigate the internet?

“The understanding is that nobody prints off photos anymore,” Krista Hazelwood, lifestyle consultant at Island Park Retirement Residence in Campbellford said. “The family all have photos, and they share them through email.” 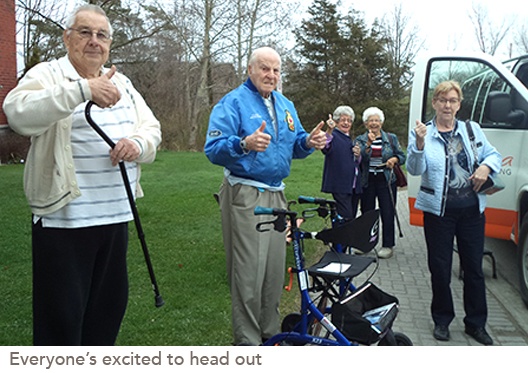 Most of today’s seniors grew up without the internet, sending letters and postcards rather than emails and instant messages. Bridging the information gap is a challenge Island Park is working to meet.

Six residents made the trip from Island Park to the local high school, all of them filled with first-day jitters. They are the first to participate in Island Park’s Cyber Seniors program. Once at the school, the residents met their new teachers: 12 high school students greeted them, ready to start teaching a course they could do in their sleep — Computers 101.

The Cyber Seniors program was introduced to Sienna Senior Living in 2014, since then the program has grown, and it is now offered at all of Sienna’s retirement residences. The goal of the program is not only to teach seniors about computers, but also to bridge the generation gap between seniors and students.

“The seniors absolutely love it,” Krista said. “They all talk about it when they get back. It’s quite a hum in the home.”

Each resident was paired with two students for the 16 one-hour classes. Armed with a lesson plan and a computer or iPad, the team began exploring the World Wide Web. But just because there was a plan, that doesn’t mean it was always followed.

“I sat down with each resident and I asked them what their goal for the program was,” Krista said. “The program has to be adapted to each person’s needs. We want the residents to feel successful.”

For some residents Google was a huge priority, because they wanted to learn new things and be able to explore the world through Google Maps. For others, Skype and the ability to connect with far-away relatives was more important. For some it was email, and the ability to view family photos instantly.

“It’s like going to the mail box and getting a letter that’s not a bill,” Krista said. “The excitement in opening it and reading it is one thing, but the excitement of being able to do this themselves is another.”

Krista emails the residents after every lesson and throughout the week.

“I think they’re all doing really well,” Krista said. “For them it’s not just two hours a week, it’s I go to class and I come home and I play. I continue to learn. I play on the computer and I continue to learn about it, and to me that shows that they want to learn.”

Although Island Park has a computer in the lounge, and iPads for circulation, many of the residents in the program preferred to purchase their own iPads.

“They’ve really taken it to extremes,” Krista said happily. She added that the residents who have their own laptops and iPads are encouraged to bring them to their lessons.

At the end of the program, the residents were given a small graduation ceremony at the high school. Dressed in cap and gown, they received their graduation diploma. For many, it was the only graduation they’d ever had.

“Many mentioned that they never had a chance to graduate,” Krista said. “One resident said, ‘It was straight to work at 16.”

A story from Island Park resident Bob BennettOn a Sunday afternoon late last June I decided to go for a walk in Ferris Park by the way of the...
END_OF_DOCUMENT_TOKEN_TO_BE_REPLACED
Innovative Programs

For Executive Chef Mackenzie Jones, food is what brings people together. Read about his love of cooking and bringing joy to the residents he serves.
END_OF_DOCUMENT_TOKEN_TO_BE_REPLACED
Island Park Retirement Residence

Bob first met Ann when she was only two months old — it’s a meeting he can’t remember, as he was only a month older.
END_OF_DOCUMENT_TOKEN_TO_BE_REPLACED