Conscripted into the Italian army at 19, Alfredo was shot twice and spent over a year as a prisoner of war — how did he survive? Read to find out!
Veteran Stories, Villa Da Vinci Retirement Residence, Ontario, Retirement, Vaughan, ON, WWII, War Stories 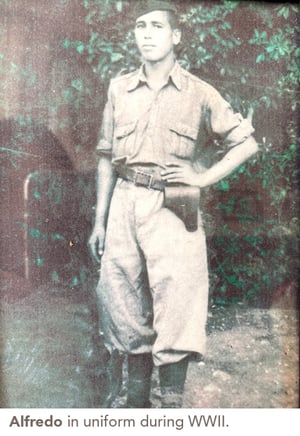 Alfredo Cannataro was born in 1922 in south Italy. His parents rented and worked a farm, filled with livestock. Cows, sheep, and dogs were constant companions in his childhood, as were his four younger siblings.

But when he turned 19, things changed.

“We had to go. You couldn’t say no,” Alfredo said. He was conscripted into the Italian military in 1942, right in the middle of WWII. At the time, Italy was allied with the Germans.

Only a month after being conscripted, Alfredo was sent overseas to fight as a foot soldier.

“[At] that time we had to [fight] like rabbits in the ground,” Alfredo said, explaining that war in the 1940s was not like war today.

He was sent to Greece. During a fight in Patras, Greece, Alfredo was shot twice. Once in the leg, and once in the head. He described these injuries as “not serious,” because he was wearing a metal helmet.

Around this time, Italy switched sides in the war, and began to fight with the Allies against Nazi Germany.

In 1943, Alfredo’s company surrendered to the German army. Alfredo was now a prisoner of war, and he was sent to work in a prison camp in Germany.

The conditions in the camp were deplorable. Alfredo was in the camp for a year, and lost nearly 20kg during that time. At his smallest, he weighed only 35kg or 77lbs.

In 1944, the Red Cross liberated the camp because of conflicts with the Geneva Convention. Alfredo and his fellow prisoners were given paperwork similar to passports, which limited their ability to travel. They were treated similarly to German citizens, having work and lodgings. However, they had to work wherever they were sent. Alfredo did work all throughout Germany, as well as in Poland, Ukraine, and France.

At the end of the war, Alfredo was released and sent home. It was a three-month journey that took him through Switzerland, Verona, Bosnia, Naples, and Calabria. He arrived home in July 1945. 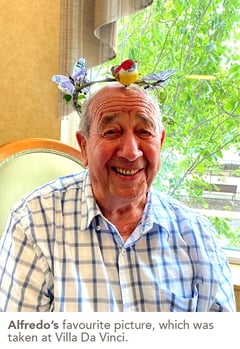 He continued to work on the family farm. In 1946 he met Caterina Bruno — they married two years later.

In 1952 one of Alfredo’s brothers moved to Canada. Two years later, in 1954, Alfredo joined him. Alfredo came to the country alone, leaving Caterina and his family in Italy. He worked to build a life here so that things would be settled when she joined him.

“Italy was almost destroyed [after the war],” Alfredo said. “The people had nothing.”

Caterina and Alfredo had three children. Today, Alfredo has six grandchildren, and continues to enjoy life at Villa Da Vinci Retirement Residence in Vaughan, ON. He often visits the nearby park and reads the news daily. But his real passion is helping people.

“I like to help people. We all have to help each other.”

Andrew Mathuik, 90, has enjoyed his four years at Aspira, he holds the staff in very high regard, is an active member of the Residents Council and...
END_OF_DOCUMENT_TOKEN_TO_BE_REPLACED
Quinte Gardens Retirement Residence

An avid reader, Joanne Perschick has a passion for books so it’s no surprise that her favourite thing about Aspira Quinte Gardens is the library. She...
END_OF_DOCUMENT_TOKEN_TO_BE_REPLACED