There was a bump in the night.

Elizabeth Mellenger rose from her bed and looked out the porthole, trying to see if there was anything outside. She was traveling on the RMS Titanic with her 13-year-old daughter, Madeleine, for a new job as the governess for the Colgate family in Bennington, Vermont. She couldn’t see anything, and so made her way back to bed. Madeleine had already completed her nightly ritual of looking at the lifejackets, neither of them could know how significant that ritual was about to become.

They were asleep when there was a pounding on the door, and a steward called, “everybody put on your lifejackets and come up on deck!”

“They knew something had happened,” said Don Mann, Elizabeth’s grandson. He recently gave a presentation at both Rosewood and Trillium retirement residences in Kingston about the Titanic and other sea disasters. 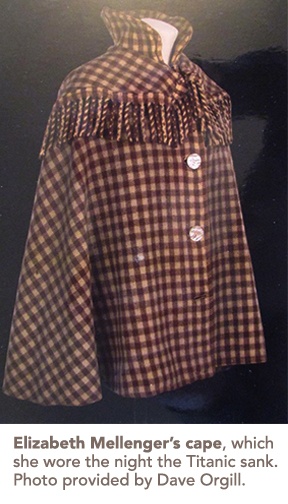 Madeleine was immediately awake, and grabbed the life jackets. She and Elizabeth made their way up to the deck so quickly that Elizabeth was wearing only her nightgown and a woolen cape, having completely forgotten her shoes.

“She took her purse, but there was no money,” Don said, explaining that passengers had been instructed to leave their valuables with the ship’s purser for “safe keeping”. “They never got their money back; it went down with the ship.”

On deck, everything was orderly and well organized. The passengers believed it was just a drill, since the Titanic couldn’t sink. They couldn’t see the iceberg at that time, but the trails of ice it had showered onto the Titanic’s deck as it scraped along the side of the iceberg were still there.

“The officers were telling people to get into lifeboats. It was very hectic, and they were told, the order came out, ‘women and children first,’” Don said. “That's possibly the first time that's ever been pronounced. It's a given, something everyone knew, but that actual pronouncement was made by the officers, ‘women and children first,’ because they knew that there were not enough lifeboats.”

The lifeboats were ordered to row away from the ship, because there was a fear the Titanic would create a whirlpool as it sank, sucking ships close to it underwater.

“They saw the ship disappear. They saw all the lights go under the water, there were people in the water screaming for help.”

The water was two degrees below freezing. Elizabeth and Madeleine’s lifeboat went back to look for survivors.

In the early morning they found Second Officer Charles Lightoller, who was struggling to hang onto a capsized inflatable raft. Don thinks Lightoller must have stayed onboard the Titanic until the last minute.

“They pulled him on board, and he was frozen stiff,” Don said. “My grandmother, Elizabeth, warmed him up. She had this beautiful wool cape, and she wrapped that around him and with that and her own body warmth she brought him back to life.”

Lightoller was the most senior officer to survive the sinking. He went on to testify at two separate inquiries regarding the events of that night.

It took 7 hours from the time the Titanic sank for the RMS Carpathia to arrive and begin rescuing survivors, according to Don.

The Titanic had left Southampton with 2,200 passengers and crew, by the end of the night 1,500 were dead. Nearly half of all 2nd class passengers, like Elizabeth and Madeleine, died.

There were only 700 survivors.

The RMS Carpathia, meanwhile, had been on course to Austria-Hungary from New York, and according to Don it was at full capacity before taking on the Titanic survivors, making it a rather cozy journey back to New York.

“You can imagine it would have been like a hospital ward,” Don said. “They were even sleeping on blankets and cots in the dining room.”

It was not until they were safely onboard Carpathia that Madeleine realized her mother, Elizabeth, had gone deaf from all of the pandemonium that took place during the Titanic’s sinking. Regardless, they met Mr. Colgate when they reached New York. In August of 2012, Elizabeth and Madeleine returned to England via ship, making a third trip back to North America, and this time Canada, in 1913 with the rest of the family, where they settled permanently.

“She was very strong, a very, very strong person,” Don said about his mother. “It didn't scare them that they'd already undergone a terrible tragedy and the sinking of Titanic, they did it twice more.”

Madeleine met Don’s father, David Daniel Mann at a printing company called Bryant Press. They were married in 1921, and welcomed their two sons soon after, and then Madeleine got sick.

“She had contracted strep throat, and these were the days before penicillin,” Don said. “There was no cure for strep throat, and it eventually ended up crippling her, so she was in a hospital for quite some time.”

It took nearly 10 years for Madeleine to recover, and even then, her doctors told her she shouldn’t have any more children.

“I wouldn't be talking to you if she had listened to her doctor,” Don said. He was born in 1933, and has one younger brother.

Don was about two when he first learned of his mother’s journey on the Titanic. He said it was always in the house, and that she was often on talk shows and radio shows. He has a story she wrote about her experience, and her original notes.

“[When they first saw the Titanic] they were awestruck,” Don said. “Apart from all the glamour and the beautiful things on board, [my mother] did have her first taste ever of ice cream while on the Titanic.” 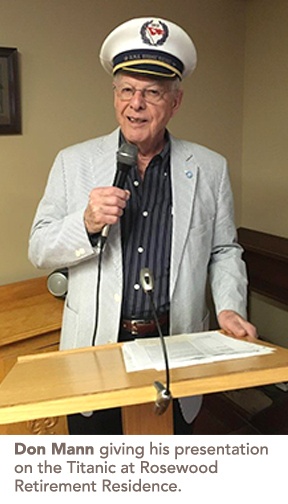 The ship cost an estimated $7.5 million to build in 1912, which would be over $400 million today, according to CNN. It was the largest ship afloat at the time.

“I think it's one of those stories that really does catch people's interest,” Don said. His mother’s story is one of the main reasons he started doing presentations on the Titanic. “I've noticed that when we talk at retirement residences, where people are elderly, they certainly can relate to it, and they're very interested in hearing the story.”

Despite his love of the topic, Don has never seen the movie Titanic.

Today, Madeleine is survived by 10 grandchildren.

Special thanks to Don Mann, who resides in Kingston, Ontario, for sharing his family’s story.

For Executive Chef Mackenzie Jones, food is what brings people together. Read about his love of cooking and bringing joy to the residents he serves.
END_OF_DOCUMENT_TOKEN_TO_BE_REPLACED
Island Park Retirement Residence

Look inside to see how our residences celebrated the holidays and rang in the new year!
END_OF_DOCUMENT_TOKEN_TO_BE_REPLACED
Stories from our Team

PSW and sushi chef is a win-win for residents!

Residents and team members at Rosewood Retirement Residence in Kingston, ON enjoyed a sushi demonstration by Brandon Gray, a PSW student who learned...
END_OF_DOCUMENT_TOKEN_TO_BE_REPLACED