During the cold war, Ronald ferried supplies through the desert between Egypt and Israel. For him, Remembrance Day is an important reminder of all the freedoms we have today.
Veteran Stories, Owen Hill Care Community, Ontario, Long-Term Care, Barrie, ON, Veterans 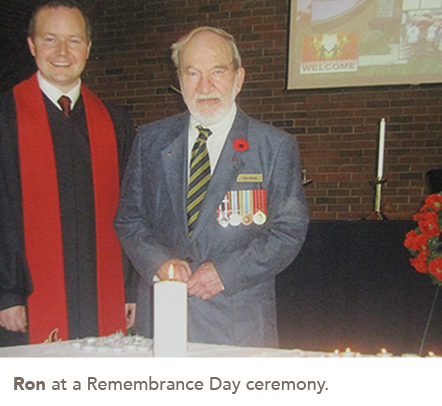 Ronald first joined the military in 1952, when he was only 17 years old. He served during the cold war, and was deployed to the Middle East from1960-1961. During that time, he was part of the Special Forces unit. He drove a large tractor truck and transported supplies between Egypt and Israel, driving across the large Sinai Desert, which is 61 thousand square km and separates the two countries. He stayed with the military for 20 years.

“When I was in the Middle East it was a traumatic experience. I saw a lot of horrible things,” Ron said. “[Remembrance Day] is important because it reminds people that Canada offered important services across the world throughout history. The army has helped give us the freedom that we live with today.”

Sneih Charan has led anything but an ordinary life. She’s travelled the globe, found love at first sight, and paved her own way through the world.
END_OF_DOCUMENT_TOKEN_TO_BE_REPLACED
Ontario

For Executive Chef Mackenzie Jones, food is what brings people together. Read about his love of cooking and bringing joy to the residents he serves.
END_OF_DOCUMENT_TOKEN_TO_BE_REPLACED