One of many chicks brought to Island Park as part of their critter visits event, had finally broken free from its shell.
Innovative Programs, Island Park Retirement Residence, Ontario, Retirement, Campbellford, ON

Could you go a round with Chick Norris? 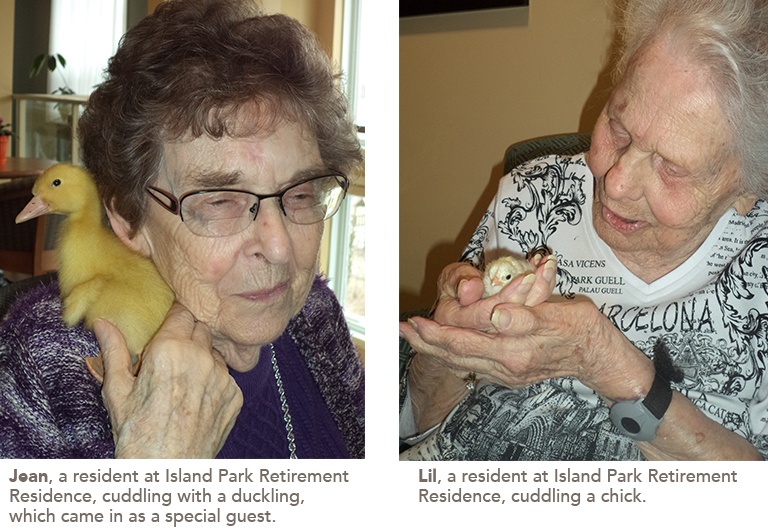 There was a sound in the night.

“Our night housekeeper thought that there was a bird in the lounge, because of the chirping,” said Krista Hazelwood, lifestyle consultant at Island Park Retirement Residence in Campbellford. “Then we realized that the hatch had happened.”

The night housekeeper wasn’t wrong, there was a bird in the lounge. More specifically, KJ, short for Krista Junior, one of many chicks brought to Island Park as part of their critter visits event, had finally broken free from its shell.

The chicks first arrived at the residence as eggs in an incubator. A local company dropped off the incubator, eggs, instructions and all other equipment the home needed. For 21 days the chicks would remain in their shells, with residents and staff checking in on them constantly and waiting excitedly for them to hatch. 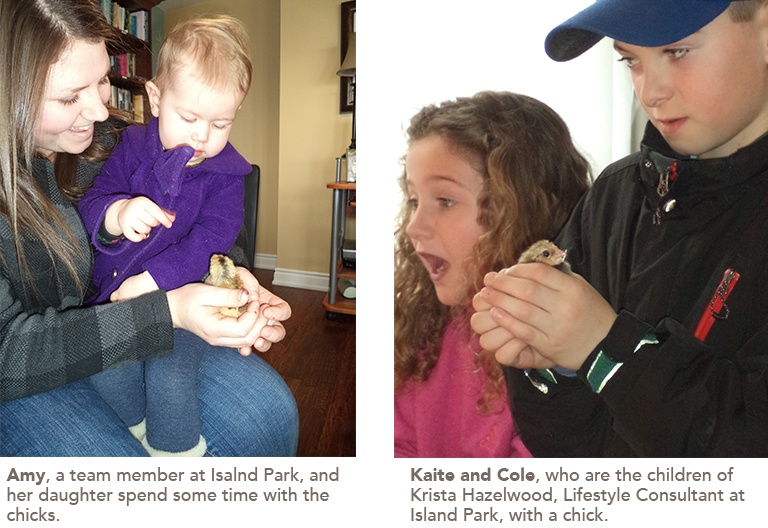 Krista posted a notice beside the incubator, which listed the optimal temperature and humidity. Whenever residents or staff noticed a fluctuation, they would rush up to Krista so that the incubator could be set right.

Meanwhile, a pot filled with potential chick names began to grow beside the incubator. Residents, staff and family were all encouraged to put a name in the pot. As chicks hatched, a name was pulled.

“We had a variety of names,” Krista said. KJ was born first, but there was also Nugget, Dixie and Chick Norris, among others.

“The residents were very excited. I had one lady say that she’d quickly eat her breakfast so that she could run up to see the chicks,” Krista said. 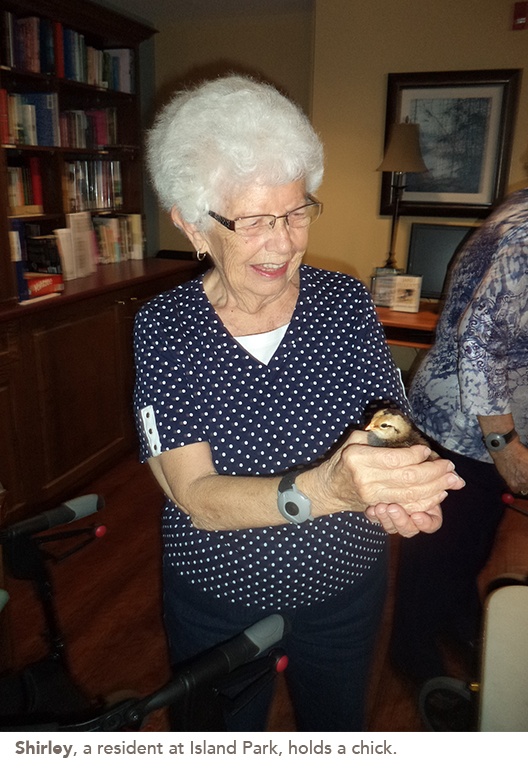 “Their days very much revolved around these chicks. They checked on them in the morning and they’d get excited when they would see one starting to hatch. The staff were totally involved in it as well. Before every shift change the staff coming on would go and check the chicks or they would cuddle them... So everybody was involved.”

Hatch notices went up for each chick, with a picture and their name, and residents would often come to spend time and hold the chicks.

“It was easy to see the joy in the many faces as these chicks snuggled into their hands,” said Krista. “The softness and newness of these little creatures was something to be experienced.”

Because of its location, many residents at Island Park used to be farmers. Krista said that many of them had expert advice, and that it brought back memories for them. For residents from the city, the rewards were just as great, giving them a chance to see something like this for the first time.

Krista said she enjoyed the hands-on element of the program, and watching the residents interact with the chicks. “There was constant activity around the incubator, around where the chicks were hatching, there was someone around there constantly.”

Sneih Charan has led anything but an ordinary life. She’s travelled the globe, found love at first sight, and paved her own way through the world.
END_OF_DOCUMENT_TOKEN_TO_BE_REPLACED
Ontario

For Executive Chef Mackenzie Jones, food is what brings people together. Read about his love of cooking and bringing joy to the residents he serves.
END_OF_DOCUMENT_TOKEN_TO_BE_REPLACED