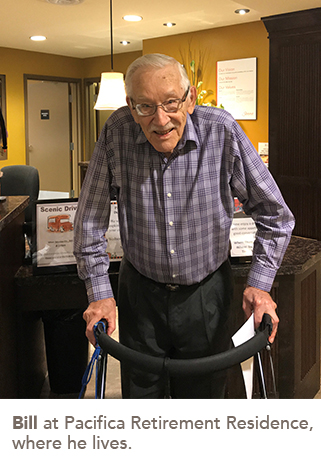 I guess that one would have to go all the way back to 1936; the year when the Royal Canadian Navy first called out to me. I was only 12 at the time, so I had a few years to wait. At 16 I filled out all of the required application forms, including my parents' consent and several letters testifying as to my character and moral conduct. Alas, the Navy replied that they were no longer enlisting Boy Seamen, so just wait and try again. At 17 I tried again, but received the same reply. At 18 I received a reply to the effect that, because I wore glasses, they turned me down again. Now by this time it was 1942; the war had been going on for a bit over two years, and I was getting desperate.

Dad gave me the good advice to enroll in a radio communication school, get a wireless operator's ticket and then the Navy might reconsider. Well this I did and, once again, went down to HMCS Discovery only to be turned down again, as now I was over qualified. I tried the Merchant Navy, who accepted me into their ranks the same day with the rank of Radio Officer.

After a short break with fellow officers in the Sylvia Court Hotel, I was signed onto a new merchant ship, which was larger and more heavily armed than the smaller naval vessels. This was my ship, Crystal Park, now my home, work place, and the skin of steel that kept us on top of the waves and away from the bottom of the oceans. I now realized that fate had steered me on the correct course. Canada's Merchant Navy Radio Officers lived with the Captain and the deck officers in the forward quarters. Two of us shared a cabin and the Chief R/0 had a cabin of his own. We ate with our fellow officers on tables covered with white linen tablecloths and silverware. Yep, we were going out to the seas of war in luxury.

Crystal Park headed south along the coast of North America, through the Panama and over to Cuba before proceeding to a convoy gathering site in the harbor of New York City. Once the required number of ships had been collected we sailed, in the cover of darkness, out into the Atlantic where we commenced crossing its northern route on the way to war-torn England. The experience of groping through the fogs off of Newfoundland with ships up ahead, astern and abeam; all of them just as invisible to us as we were to them, was as nerve wracking as anything the enemy might be planning for us. Convoys across the North Atlantic always seemed to provide this additional bit of excitement. Many are the tales that can be told of the near misses, odd bits of comedy, and many tragedies.

Bill's war? As you may have gleaned it was not a big deal. War at sea is just one more perilous danger added to all of the others that can exist; even in peacetime — collisions, fires, storms engine failures, etc. I was never shot at by the enemy, but still received my share of medals for sailing in various dangerous waters including both the Atlantic, and later, the Pacific. After the end of the war I continued my life at sea for a further five years before I was finally satisfied and able to quell the desire that had kept calling me back. I guess that there are those mermaid sirens out there playing their flutes, lutes, and lyres, luring seafarers onto the depths over and over again. But now their melodies play to deaf ears.

Look inside to see how our residences celebrated the holidays and rang in the new year!
END_OF_DOCUMENT_TOKEN_TO_BE_REPLACED
Stories from our Team

Each month, we’re pausing to recognize some of the outstanding team members who work with us. Thank you for the work you do each day. You are all...
END_OF_DOCUMENT_TOKEN_TO_BE_REPLACED
Inspirational Life

Known for her bubbly personality, Eva (Eve) Dalzell was nominated for the 2021 LEAP Award by the BC Senior Living Association in honour of the...
END_OF_DOCUMENT_TOKEN_TO_BE_REPLACED